The Rotary Club of Marco Island Sunrise presented its Unsung Hero Award for Third Quarter, 2016 to Susan Kubat. Susan was recognized for her services to the Marco Island community and placing “service above self” consistent with Rotary’s aspirations.

Susan has worked endlessly to protect our environment. She has served as a volunteer board member and president of Friends of Tigertail. Susan has also been an exceptional volunteer for the Conservancy of Southwest Florida, where she oversees 25 additional Conservancy volunteers.

Susan coordinates Tigertail Beach volunteers, as a beach environment steward, and provides guided educational tours to residents and visitors. Susan has recorded over 2,400 hours of service to the Conservancy, saving the Conservancy over $50,000. Susan and her team of volunteers have reached thousands of visitors at Tigertail Beach.

In her spare time, Susan and her husband Ken work to clean and maintain Tigertail Beach. She serves as a naturalist aboard the Good 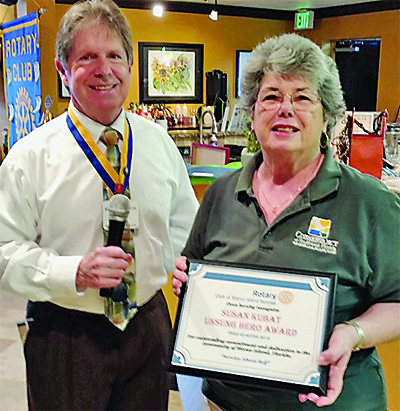 Fortune II, a pontoon cruise in Rookery Bay. And, Susan is a Critter Courier, picking up and delivering injured wildlife from the Marco Island area to the Conservancy von Arx Animal Hospital.

As Sunrise Rotary’s Unsung Hero, Susan was awarded a plaque commemorating the recognition. In addition, the Club will donate $100 to a charity of Susan’s choice. The Club will also donate 20 polio vaccines in Susan’s name as part of Rotary International’s effort to eradicate polio.

The Unsung Hero award recognizes a member of the Marco Island community who unselfishly helps others and who has not generally been recognized for such service. The recipient is not a member of Rotary, but either works, lives or provides service on Marco Island.