Survivor Stories from Pink Out 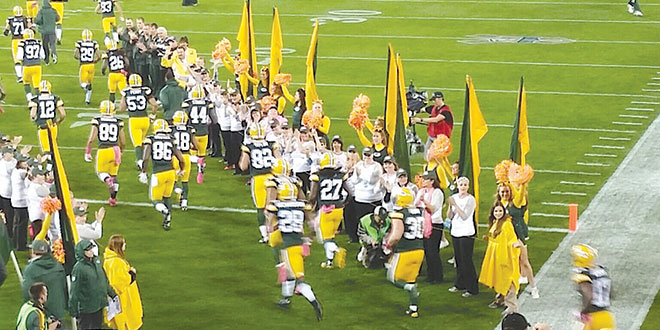 Lisa (second from right in with long pink scarf) is among breast cancer survivors honored at a Green Bay Packers game. Lisa hales from Wisconsin.

Each year, the Lely High School Volleyball team honors breast cancer survivors during a special “Pink Out” game. All proceeds from the game, t-shirt sales, etc go to a breast cancer support organization. A few of the players have had their own breast cancer battles within their families. Two were willing to share a bit about their experience and were included in the game program. Barb Cooper is the grandmother of Katie Moss, and Lisa Meurgue is the mother of Emmanuelle Meurgue.

Here are their stories, in their words:

Barb Cooper – Saved by a biopsy

“In October 1999, I bought my first condo on Marco Island. My daughter, Heidi, her husband and my adorable grandson Kenny (five) lived here, and I visited often. In 1999, they gave me a granddaughter Katie, and grandma had to move!

In November, I returned to Ann Arbor, Michigan, where I had lived and sold real estate for over 25 years. I got my affairs in order and saw all my doctors for check-ups, including my mammogram. Ugh! She found some salt-like sprinkles on the left breast and suggested taking a biopsy. She said they were probably nothing but could often be indicators of things in the future we could prepare for. I readily agreed. Coincidentally, a friend was with me and had the same result. At the suggestion of a biopsy, she fled from the office. Three days after the biopsy, the doctor called and said the white spots were nothing, however, something else had shown up in the petri dish. Another part of the biopsy showed cancer. I eventually learned not all breast cancers show up on mammograms. Many, many of them don’t.

I went into shock. We had never had a case of any kind of cancer on either side of my family. The doctor also told me it was a type that would be 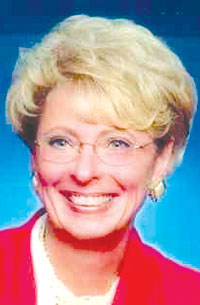 on both sides so there was no reason to take a biopsy of the right side. He also said it was early, had not gotten “loose” and did not believe it had gotten into my lymph nodes.

Since I had done relocation and sales for many doctors at the U of M hospital, I had a chance to get many opinions. They all said the same thing. Get them off now! So, in 2000, I did. They were right. There was nothing in my lymph nodes. They also guided me fortunately to a doctor who did natural reconstruction. After surgery, all the material in my breasts is natural, living tissue with blood vessels still attached. I felt like I had experienced a miracle.

Meanwhile, my friend’s situation deteriorated badly. By the time she got help, she had stage 4 cancer, endured an agony of chemo, radiation and medications. It was awful.

My move to Marco Island was delayed a couple of years, but I made it — alive and healthy! My friend died. So if your doctor wants to do a biopsy, I suggest you run and jump on the table. It saved my life.”

Lisa Meurgue – You have cancer club

My annual mammogram in 2008 was normal. Three months later, I found a lump. ‘It will be gone in three months.’ That is what my doctor said. But he was wrong, very wrong. I was diagnosed with stage 2 breast cancer. After having lost my sister in 2006 to ovarian cancer, I really did not know how I was going to share this news with our daughters and my parents. The word ‘cancer’ reminded our girls of 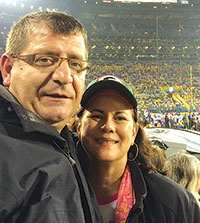 the loss of their beloved aunt. This disease not only affects the person diagnosed, but everyone around them. But with the love and support of family and so many friends, we all fought the battle, and I am happy to say that I have celebrated four years of being cancer free! My father is also a survivor, 21+ plus years; he beat non-Hodgkins Lymphoma. Our family has raised over $90,000 throughout the years (long before my sister lost her battle), benefitting the American Cancer Society’s Relay for Life and the Avon walk for breast cancer in the hope that none of our daughter’s has to hear the dreaded words, ‘You have cancer.’ I have walked 26.2 miles in New York in one day with daughter, Margaux, in 2009 and again with Alexandra in 2011. Emmanuelle and I will walk in New York soon, all the time raising awareness and money for research, education and free services for those who cannot afford it. Also to inspire a message of hope. I want women to know I am living proof there is a light at the end of the tunnel. After fighting the fight, you learn to truly not sweat the small stuff. For example, while going through chemo, I never had a bad hair day…. since I didn’t have any hair! Every day is truly a gift. Remember to tell those in your life how much you love them, enjoy every moment and be kind to others; you never know what burden they may be facing. Cancer is part of who I am, but it does not define me. All are welcome to walk with Emmanuelle and me, April 12, 2015, at Mackle Park for the Marco Relay! I was treated at the Moffitt Center in Tampa where their screen saver displays, ‘Will today be the day?’

Come walk with us and be part of the hope! LIVE LOVE LELY!”