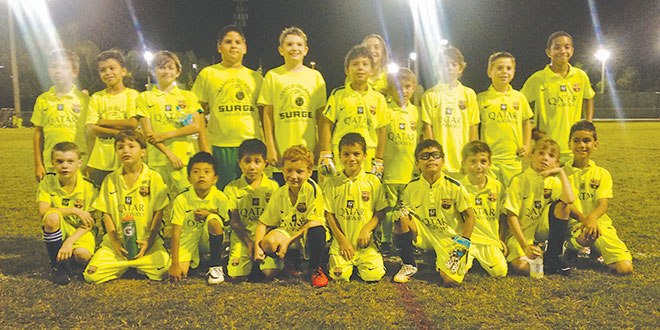 The two Marco Island based youth soccer clubs, SURGE and the Optimist Club, squared off in the local Mexisoccer Naples soccer league at East Naples Park on Friday.

The U9 SURGE team beat the Optimist handily 5-2. With the win, the U9 SURGE proceed to the playoffs against Holanda on Friday. The championship is played on Saturday night.

The U7 game between the #2 seed SURGE and #3 seed Optimist teams was a gripping match. Tied at 2-2 in regular time, the game went into overtime,

and was finally decided in extra penalty kicks when 5 year old Luke Trebilcock banged in the winning penalty shot for the SURGE.

“The kids on both teams played hard, and it was a great game to watch,” said Chadd Chustz, SURGE U7 coach. “Mexisoccer Naples does a great job of bringing the community together for the kids to compete and have fun.”

The U7 SURGE face the Golden Gate Eagles for the Mexisoccer Naples championship on Saturday night in East Naples Park, followed by the trophy ceremony.