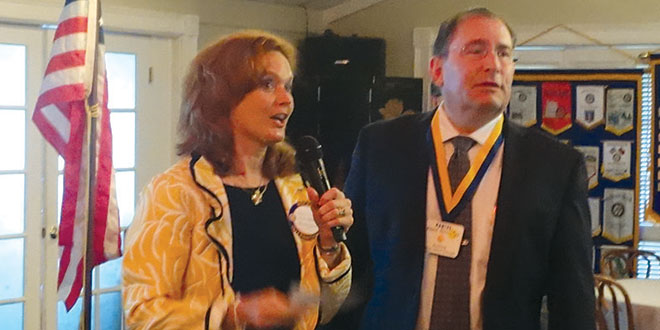 The Rotary Club of Marco Island Sunrise made multiple charitable donations at its recent breakfast meeting. The meeting featured speaker Bob Thomas, who explained how the club’s contributions to Rotary International truly made a difference. Highlights of Bob’s presentation included Rotary’s top philanthropic priority of eradication of polio on a global basis. Rotary International’s goal is for a contribution of $35 per member. In its most recent fiscal year, members of Sunrise Rotary actually contributed $101 per member.

Bob explained that the Sunrise Rotary Club qualifies for district grant applications by exceeding the annual fund contribution of $25 per person. District grants obtained by the club included a $5,000 grant for Meals of Hope, and $30,000 for the Convent of San Francisco in Cuenca, Ecuador (pending receipt). Bob noted that the club has also received global grants totaling $120,000, for the Gift of Life, which as of November, has provided funds for 24 children 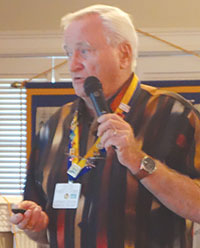 from Haiti to receive life saving surgery over the past two years.

In addition to Bob, the club enjoyed a presentation by scholarship recipient Victoria Zelner. Victoria confirmed that she is doing well in college and thanked members of the club for their scholarship support.

Jane Watt, founder and board chair and Melissa Scott, principal of Marco Island Academy (MIA), were presented a check for $2,500 by Neil Snyder. The check represents proceeds from a Rotary District 6960 grant, which the Sunrise Club successfully applied for to benefit the school. The funds are earmarked for acquisition of much needed desks for MIA.

Giving did not end with the Marco Island Academy. Next was St. Matthew’s House, a Naples-based organization that started in 1987, when a group of parishioners followed a calling to bring food to a homeless population living in a nearby wooded area. It has expanded through community support into a multi-faceted organization offering emergency/traditional 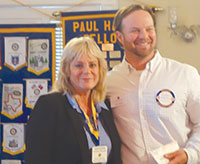 housing, meals and a substance abuse counseling and recovery program. St. Matthew’s House provides over 40,000 meals per year and housing for more than 1,000. The club traditionally collects Thanksgiving donations from members earmarked for St. Matthew’s House, and continued its tradition with a donation of $1,000.

Sunrise Rotary members were surprised by a donation made to the club during the morning meeting. Durell Buzzini, a 50/50 drawing winner at a recent Meals of Hope event at Stan’s in Goodland, visited the club to donate her portion of the winnings to the Meals of Hope effort. And, she did even more, arranging for a matching donation from UBS Foundation so that the total contribution was nearly $1,000.