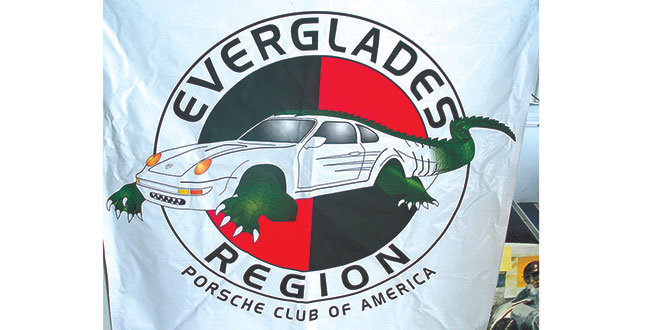 As with “birds of a feather,” connoisseurs of a certain iconic German sports car brand also enjoy “flocking together,” in their case to revel in their shared interest and some good old fashioned fun.

Such is the case for the Everglades Region Porsche Club of America, which held its Inaugural Summer Party on a recent Sunday afternoon in Goodland. About 60 members flocked to the home of Chris and Jenny Branston, where they enjoyed live music from “The Good Bad Kids” band, food from Little Pete’s “A Little Bite of Brooklyn” food truck, and of course, each other’s company.

The Porsche Club had a good turnout for its Summer Party in Goodland.

members’ pride in their high-performance buggies was evident in the line of Porsches of various vintages and model types that lined a portion of Palm Avenue near the Branston’s home.

Everglades Region President Chris Branston said there are about 600 owners of the coveted automobiles who are members of the club, which covers Collier, Charlotte, DeSoto, Glades, Hendry and Lee counties. They are part of the roughly 100,000 Porsche owners, nationwide, who belong to the PCA, which is celebrating its 60th anniversary.

“Our region is a very active region,” said Branston of the club, which was founded in 1998. During the season, there are monthly potluck dinners for members and other gatherings. But, as the July 24 party indicates, the fun continues during the lazy, hazy and oh-so-warm days of summer.

On Aug. 18 there will be a two-hour-long, sunset cruise from Naples City Dock on the

Chris and Jenny Branston and their 1991 Porsche 911 Cabriolet.

“I just love the way they drive,” said Donna Giasi. “It’s a bit of a rough ride and you feel the road and you really feel like you’re driving a car.”

The company was established in 1948 near Stuttgart, in southern Germany, by Ferdinand Porsche and his son, also named Ferdinand but known as “Ferry.” Over the years, they’ve become a favorite of sports car enthusiasts, such as the late James Dean, and a force on the racetrack.

Chris Branston purchased his first Porsche in 1970 in his

“The Good Bad Kids” performed for the club.

native England. It was a 912 model and since then, he’s purchased 12 more, the last being the 1991 Porsche 911 Cabriolet he drives today.

Why are the cars so coveted?

“Engineering,” said Chris Branston of the cars. “The Porsche has changed very little over the years. It evolves. They don’t bring out new models for the sake of bringing out new models. It has developed pretty slowly. I have often visited the factory and the research department spends years researching things. They were hand-built until the late 1990s. Engineering and craftsmanship set them apart.”

For information about the Everglades Region Porsche Club of America, visit www.egs.pca.org or send an email to evergladesregionpca12@gmail.com.