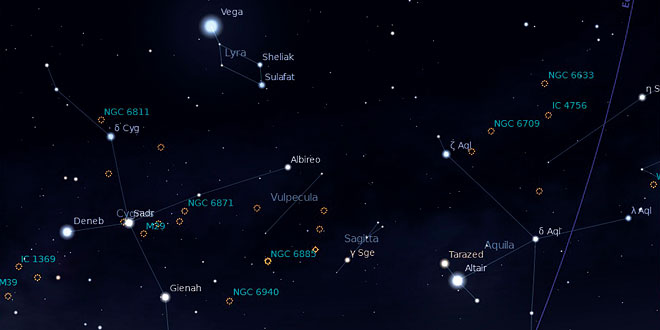 When the Summer Triangle rises you can be sure the rainy season is not far off! Which brings up an important point – careful observation of the night sky indicates what time of year it is. Indeed a Neolithic farmer could nail it down almost to the exact day, a vital importance determining when spring planting and harvest are due. He/she did this by noticing which stars were visible just before or after sunset. Since a misreading could be fatal (crop loss due to frost), there is speculation that certain people became specialists in reading the stars which led to formation of a priestly class and calendar – a first step towards civilization.

The Summer Triangle consists of Vega, Deneb and Altair. Vega and Altair are close neighbors of the Sun while Deneb is much more distant. Deneb is the brightest star in the constellation Cygnus, the Swan often identified as the Northern Cross. The third magnitude star in the beak of the swan is known as Albireo, one of the most beautiful doubles in the sky. To see the pair of blue and gold stars, your binoculars must be held rock steady, preferably on a tripod. Naked eye observers note how the Milky Way splits into two parts in Cygnus, this is known as the Great Rift. It’s best to wait until Cygnus is much higher in the sky to see this.

Also buried in the Milky Way is the nearby Aquila, the eagle. With the bright Altair in its tail the bird seems to be headed south for the winter months too early. In 1918, a nova exploded in Aquila that outshone Altair; the Allies in WWI referred to it as their victory star. There are a number of clusters and nebulas in Aquila, but they tend to be on the faint side.

Lying between Cygnus and Aquila is the tiny but rather cute constellation of Sagitta, the arrow. It seems to have been shot by Hercules at the two birds but uncharacteristically (for him) misses both. Halfway between the two brightest stars in the shaft of the arrow lies M71 a globular cluster that was mistaken for an open cluster for many years. It was finally correctly identified as a globular only in the 1970’s. At magnitude 6.1 this is an object only for binocular users.