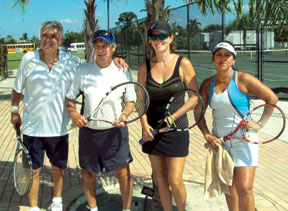 It was the beginning of a beautiful day. At 8:00 AM the sun was bright, the skies were clear ant the temperature was a cool 70 degrees. There was a slight breeze; it was a great day for tennis. The gathering of tennis players from all four tennis clubs on Marco Island showed this, as they gathered at the Marco YMCA for the final phase (phase IV) of this year’s island-wide tennis social program. The new Tennis Director of the Y, Raul Saad and his staff, Erin Olmes and Betty Neville were 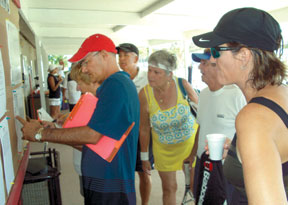 Capacity for the day was 32 players and all eight courts of the Y were utilized for play. This was a mixed double social so men and women teams competed for the championship. The pairings were assigned by Raul for the matches. Activity started at 8:30 AM. Three matches were scheduled for each team; 3.0 and 3.5 levels of players were matched according 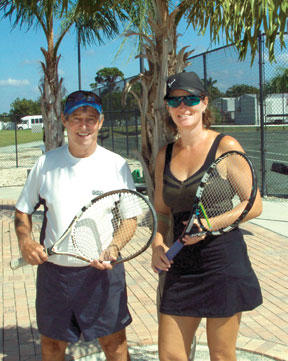 to skill level. Members from the Island Club, The Racquet Center and Hideaway Beach Club participated.

The games were lively and all eight of the Y courts were occupied for the full two hours of play. Afterward, it was determined that the teams of Milly Martin/ Peter Piro and Andrea Wahak/Roger Boissee were tied on points. Raul then scheduled a one point sudden death playoff. It was won by the Washak/Boissee team. A large number of prizes were donated by them at the time he presented the awards.

After the matches, sandwiches and beverages 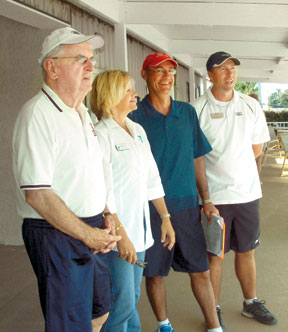 Comments were overheard at the celebration that this, the fourth event of the 2012 series, was the best. When asked about his appraisal of the event, Raul stated, “Today went exceedingly well. We achieved our goal to make this one to remember.” Everyone felt the same way as judged by the happy smiles on the faces of the players as they left.