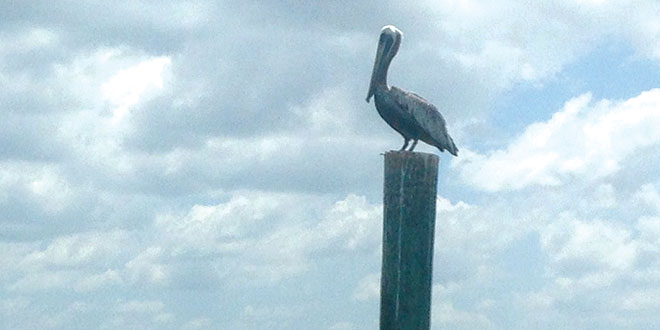 A pelican perches on a post. PHOTOS BY MELINDA GRAY

It’s September, statistically the slowest month before the inevitable up-swing into another season, and finding fun things to do locally is getting more challenging. Thus, despite last weeks of record-breaking heat, my best friend, Alicia Cameron, and I set out on our first Goodland kayak journey; no small feat for a couple of full-time moms with full-time jobs.

A long-term shortage of recreation time has made me an unwilling indoor-girl — something I’ve always fought by taking last-minute adventures, often throwing caution to the wind. I once found myself clinging to the side of a cliff, mocked by my mind’s useless “would, should and could haves,” but through my past impulsiveness, I’ve learned the importance of planning things out.

Putting our easily burned bodies out in the hot, mid-afternoon sun proved to be the least of our worries. Alicia hadn’t kayaked since she was a kid, and I had only done so once before. Among losing my phone to the canal and shredding my hands on barnacles, the all-around failure of that first attempt had me feeling a bit wary. Fortunately, in the days leading up to our meticulously planned trip, everything started to fall into place.

Consulting the tide chart, we debated how and when we should go, and finally set the departure for 1:30 PM from my dock. The night before the trip, we promised each other that we would venture out no matter what. Alicia packed the snacks and beverages, having assembled practically a full picnic; she left nothing out. I gathered the safety items on our list. Early that Sunday morning, the weather man promised that we would see smooth kayaking later that afternoon.

As I found on my first trip, getting into the kayak was a piece of cake, and with an early start, we paddled against the tide with ease. The cool breeze that greeted us at the end of the canal felt glorious after 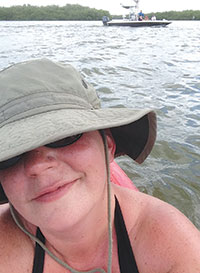 Hello from my kayak to yours!

the wall of humidity we’d hit coming out of the air-conditioned house.

We spent four hours exploring our home from this new point of view. Cruising in and out of Goodland’s many canals, we felt like a couple of professionals by the time we passed Marker 8.5. Floating around Buzzard Bay, we ate our lunch and snapped some silly “selfies” before heading back the way we had come.

We came to our last stop at the ramp in Margood Park. This was my moment of truth. A nagging worry silently grew throughout the day, and it had me dreading the end of our trip where I would be faced with getting out of my kayak. I was haunted by my previous attempt at exiting a kayak; it had been utterly graceless and pretty traumatic.

Thankfully, the day ended as perfectly as it had started. With a quick call to fellow Goodlander Jason Sines, who, until now, I knew only as “the kayak guy.” We got a little help up the ramp and a ride home for our boats. Anyone enjoying happy hour at Marker 8.5 later that evening probably witnessed our multiple high-fives; we felt wonderful, like we had really accomplished something.

Alicia and I have been best friends from virtually the moment we met, and getting some much needed “girl time” on our only mutual day off was just what I needed. The experience was only made better by the fact that we did something outdoors that required some physical activity. It may have been the adrenalin influencing my mood, but I’ve never been happier to be where I am. I love Goodland.