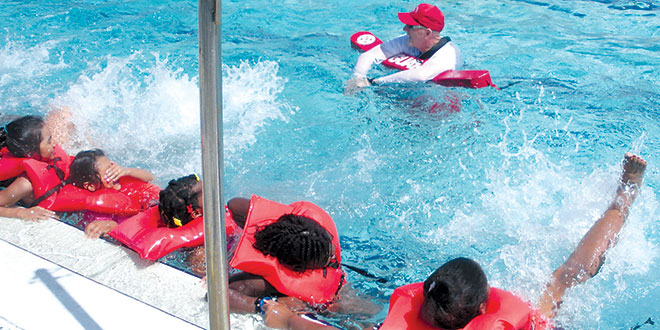 Judging by the laughter and excitement emanating from the grade school students, it might have been hard to tell that serious instruction was occurring at the Greater Marco Family YMCA’s Ms. Dottie Weiner Aquatics Center.

Garbed in swim attire, the youths were gathered there on a recent morning for a session of the annual Waterwise Program, which teaches third graders from Tommie Barfield and Manatee elementary schools the basics of water and boating safety.

“What happens is, it’s summer time and kids are going to be around water, whether it’s in a pool or at the beach,” said Jim Pope, a captain-paramedic with the city’s Fire-Rescue Department. “So basically, what we do is try to get the kids to increase their swimming ability so there’s not an emergency and if there is an emergency, that’s where we come in and they’ll know exactly what to do.”

Waterwise was designed more than 15 years ago by Dottie “Miss Dottie” Weiner, who started its “Learn to Swim” classes in 1972 and directed the aquatics program until 2012, teaching thousands of children and adults 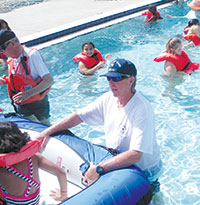 to swim over the years.

During the three-week long program’s one and a half hour sessions, the Coast Guard Auxiliary teaches the children about how to use marine radios, the proper way to get into a life boat and the importance of never sitting on the bow of a motorized boat, and how to put on a life jacket and float.

“What we’re trying to do here is, No. 1, tell them about wearing a life jacket,” said Commodore Walter Jaskiewicz, of the Marco Island Coast Guard Auxiliary. “When they get on a boat, get a life jacket, the right sized life jacket and make sure it fits. The other thing we’re trying to impress upon them is what to do if the individual driving a boat passes out or something happens, and they’re by themselves. We show them how to shut the engine off with the key, put the throttle in neutral and most importantly, how to use the radio. We impress on them what channel to use – Channel 16. How to use the microphone? You press the button and say the magic words, ‘Mayday, Mayday, Mayday,’ and then release the button and listen for assistance. We also teach them how to use a boat’s horn to alert nearby boats that they are in distress. It’s press that horn until help comes from one 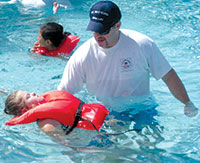 of those boats and they’re (the students) very receptive to it.”

Pope and two fire-rescue department colleagues offered tips for emergency situations, such as CPR, basic first aid and the importance of calling 9-1-1 if a crisis should occur. Students were told not to go into a pool to rescue someone in distress in the water, but to use a tool, such as a swimming pool “noodle” or a “pool hook,” to pull the person to safety.

Pool safety instruction was handled by Steven “Bear” Terstegge, a lifeguard at the Marco Y, who also taught the students about basic, lifesaving swimming strokes and how to stay afloat.

Joel Frysinger, the Marco Y’s program coordinator said about the program, which began May 9 and ends May 29, will serve about 450 kids between the two elementary schools.

“A lot of people have pools, but there are also beaches and canals,” said Frysinger. “The unfortunate part is that because of all the beautiful water that surrounds us, we have drownings. The fire department tells me that they usually have five to six drowning just on Marco Island every single year and that’s too many. One is too many. We just try to teach the kids how to be comfortable with the water because you’d be surprised that with some of these third grade kids, this is the first time they’ve been in a swimming pool.”