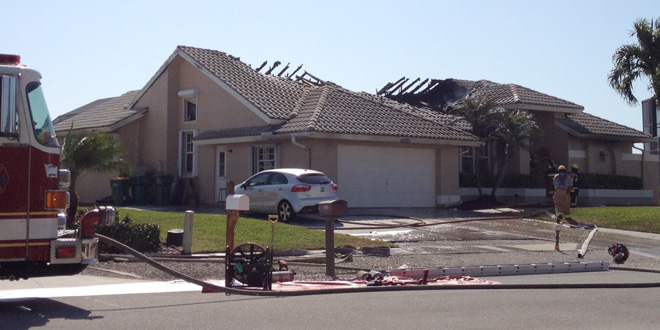 The fire yesterday was determined to have been caused by a scented candle too close to a roll of paper towels in the kitchen.  The candle was because the owner was having a house showing and the candle would make the house smell nice.  We turned the house over to the owner at approximately 19:30

At 1:12 this afternoon the Marco Island Fire-Rescue Department received  a call of a structure fire in the 1700 block of Waterfall Court. The call was received from an individual on Bahama Rd who saw flames and smoke coming from the roof of a structure across the canal.

Units from Marco Island, Isle of Capri, East Naples and Collier County EMS were dispatched to the scene. Upon arrival of the first engine heavy fire was found coming from the roof of the structure and smoke was blanketing across the street.  Command immediately called a second alarm. Crews from Marco Island made an aggressive attack. As other fire crews arrived they assisted in the extinguishment of the fire. The structure lost approximately three quarters of the entire roof and is a total loss. The owner was not a home at the time of the fire but arrived shortly after fire crews arrived on scene. Fire units remain on the scene at this time and Marco Island Fire Investigators are working to determine the origin of the fire.