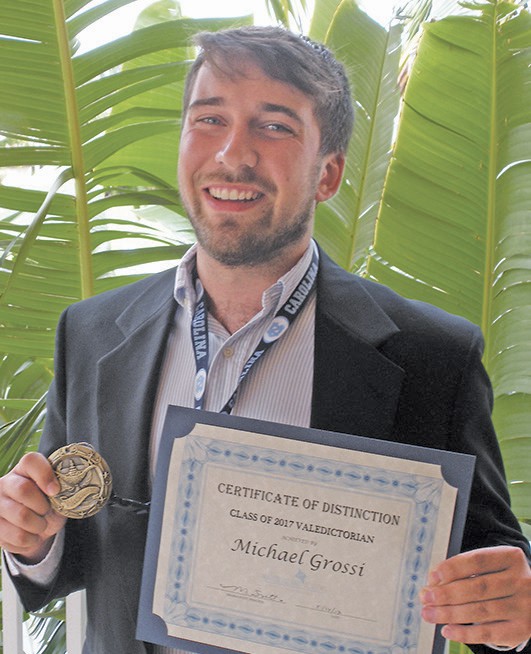 Michael Grossi has found that taking the road less traveled can truly make all the difference.

He credits taking that approach and striving for excellence as being key to his becoming valedictorian of Marco Island Academy’s class of 2017 with a 6.0 grade point average and an associate’s degree from Florida Gulf Coast University under his belt. Michael Vale was salutatorian.

“For many people, it’s unusual to see someone coming out with an associates of arts degree before you even get your high school degree, but for me, that’s just normal,” said Michael, who’s the son of John Grossi. “That’s breaking the boundary. That’s just seeing what you can accomplish, what you can do.

Michael achieved his lofty GPA by taking advanced courses at MIA, along with extra classes through the Florida Virtual School, accumulating 20 of the 24 required for graduation by the end of his sophomore year.

During his time at MIA, he was president of the Key Club, and a member of the National Honor Society, student council, the Interact Club and the Knights of Columbus Service.

Michael said chose such a rigorous academic path because he simply liked the challenge.

“I think success goes so many different routes and if you don’t push yourself, you’re never going to get there,” he said. “I think you need to begin working on success early and that a lot of success depends on being self-driven. You need to know what your goals are in life. For me, it was about starting to get into it a little bit early in life and finding out what do I want to do, what interests me.”

With 67 college credits, a total enhanced by MIA’s Cambridge AICE program courses and College Level Examination Program (CLEP) tests, Michael expects to complete his bachelor’s degree in two to three years. His next academic stop will be at the University of North Carolina at Chapel Hill, where he has a fullride scholarship.

There, he intends to major in chemistry and pharmacy, with an eye towards a career in pharmacokinetics, the branch of pharmacology focused on the movement of drugs within the body.

“I want to see the way that receptors and drugs move through the body and how we can work with cancer and work with skin disorders and issues that have yet to be discovered, and see how pharmacokinetics fix them,” he said.

Michael credits the advanced biology and chemistry courses at MIA for helping him discover a love of science and medicine.

He has no intention of letting his love of learning wane as the years pass.

“I think that’s what life calls you to do,” he said. “You can’t stop growing. You learn and you grow every day.”