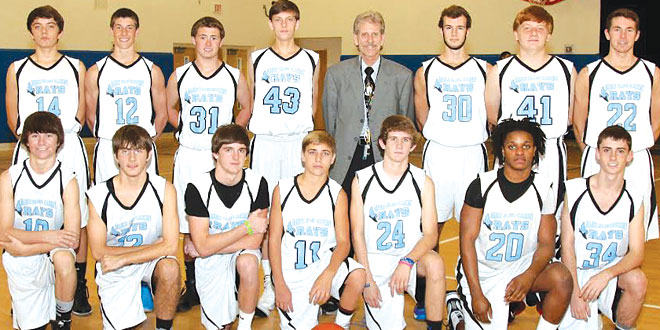 Cole Stretton became the leading scorer in Marco Island Academy school history with a nice three-point shot at the 6:45 mark of the fourth quarter against Donahue Academy on Friday evening. Stretton ended the game with 14 points for a total of 553, eclipsing the old mark of 548 by Jared Jackson. He was named to the All-Tournament Team for The Cougar Invitational Holiday Classic at The Canterbury School in Ft. Myers. His total now after 11 games is 573 points. With at least 15 games left this season, Stretton should end the season near the 850-point mark with two seasons remaining at MIA. He is currently the fourth leading scorer in the area with an average of 17.7 points-per-game (ppg). He is in the top five in steals and assists (tied for first).

Preston Reese continues to rebound well and is leading the area with nearly 11 caroms per game. He is an outstanding jumper and continues to become stronger. His work on offense is showing improvement which is important for the Rays success in the second part of the team’s schedule.

Patrick Michel is the defensive leader of 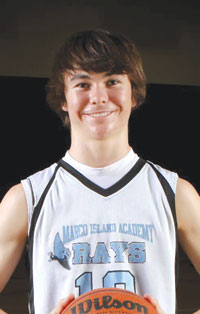 the team and is really beginning to show signs of regaining his basketball talent after knee surgery in October. His rebounding is strong, and he is starting to get his shooting form back. In fact, he was 6-6 from the field against Donahue. His upper body strength is really an asset to his overall game, and of course, he is very quick up and down the court.

Peter Servente is the second leading scorer for the Rays with 10.4 ppg. His defense is strong, and he rebounds well on the defensive glass. Servente is much stronger than a year ago and is beginning to play like an upper classman should. His shooting is coming into form from the perimeter and the foul stripe. He should have a strong second half to the season.

Brandon Estremera and Miles Carlisle are working hard for the fifth starting position and have both shown signs of life from the three-point line. The scoring they provide will come in handy in the games to come.

The team is very young with no seniors and 12 freshman and sophomore players. The future looks very bright for the MIA hoopsters.