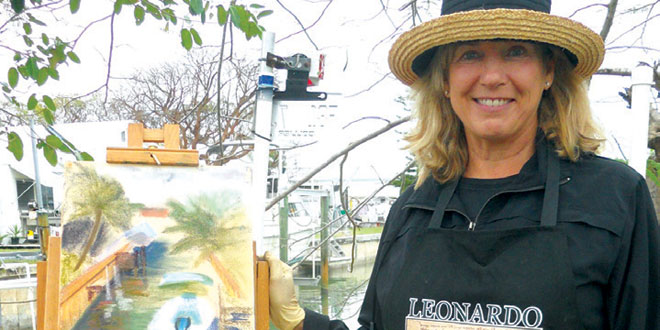 Goodland is more fun than a barrel of monkeys. Well, what I really mean to say is more fun than a traveling polar bear, a mounted deer head, a celebrity parrot and artists perched on a canal bank. Now that’s a crazy combination, isn’t it?

First, let’s talk about the artists since they would seem to be somewhat of a normal sighting in Goodland. I just happened to see three women doing their “plein air thing” at the end of one of our canals. It turns out that the famed artist Robert Gruppe likes to paint this sort of scene and had indeed painted this exact one. These women, Nancy Shelley, Cynthia Prince and Peggy Chandler, had met in an art class and they challenged themselves to paint that same canal scene.  They were having fun working 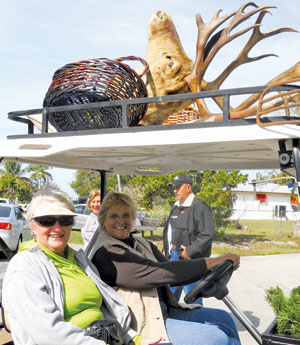 Tommie and her friend with their big deer head garage sale find. PHOTOS BY Joanie Fuller

toward a good result! I loved talking to them and Peggy’s pastel looked so good, I wish I could purchase it!!

Most of you know Goodland has a garage sale in March. Well I just about fainted when I saw Tommie Dee and her friend carrying a mounted deer head on top of her golf cart that day. I don’t know who sold it to them, but I do know it caused quite a reaction roaming down the streets of our village. Wow! I wonder where it is now…

And right after that, I saw a polar bear riding along in a golf cart. This cart was going so fast I had to send someone after it – I needed to talk to this driver. You’ve got to admit, that is an unusual sighting – even for Goodland.

But what a great 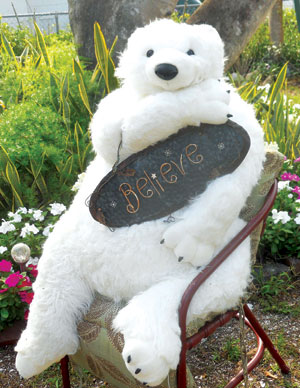 Polar Bear in her Goodland garden.

story. Margi Fortune takes care of the polar bear which she named Priscilla. Priscilla travels from house to house around Goodland cheering up folks. She sometimes wears a bow around her neck to symbolize a particular holiday and she has different names according to where she is. She is a fantastic symbol of the giving and thoughtful Goodland spirit and she has a great life with so many people loving her.

In addition to our stuffed animals, we have a live critter, Pirate the Parrot. A handsome and colorful bird, he belongs to “Chuckles” and he is a regular at Little Bar’s Happy Hour. In fact, being there is his main social activity for the day. He comes over every day at 3 o’clock and stays until around 6 o’clock, welcoming everyone. Incidentally he loves crackers and he has quite 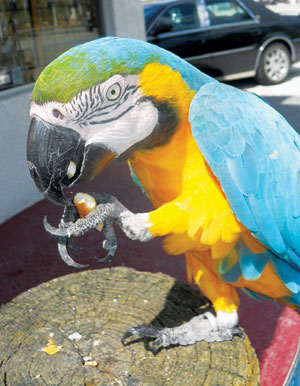 Pirate, the Parrot, at Happy Hour.

a vocabulary which includes knowing all his neighbor’s dog’s names. When the neighbor’s are calling their dog, Pirate hears them and helps. So you might say, he is a great host and a good citizen too. But curious visitors should always mind his space. Pirate is friendly but is not too keen on being touched. He is, however, very photogenic!

You have always known that Goodland has spirit, diversity and a quirky personality, but now you know even more about who lives here. Now you know that it definitely is more fun than a barrel of monkeys because we have great neighbors, guest artists and lots of critters too.

Joanie Fuller, originally from Atlanta, lived in Naples for eleven years before moving to Goodland in 2007. She is a past President of the Goodland Civic Association and is now serving on Commissioner Donna Fiala’s Islands Advisory Committee.