Strange Goings On… And It’s Not Even Halloween! 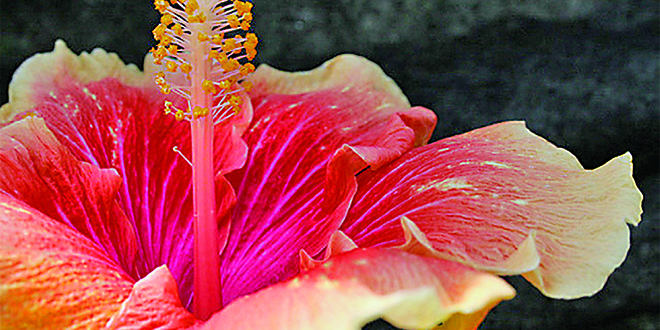 Photos by Jory Westberry | Flowers not chomped by Ratty.

I love the exquisite blooms, flowering trees and swaying palms of Southwest Florida and, even though it takes a lot of work, it’s totally worth the effort to sustain beauty in my own yard. When I walk the dog, ride my bike or drive around the Isles of Capri or Marco Island, I notice and appreciate the diligence of others. Bravo to all of you, care-takers of our universe!

Enter – The Wake-Up Call
With the great weather during the “winter,” I’m more motivated to transplant and re-architect my plants, pots, re-pot orchids, prune and sadly, say “good-bye” to those stragglers who haven’t fared well or look downright puny compared to what they should have been in my mind.

So, I’m out in my yard one day and I notice that my neighbor has set a periphery of traps around the base of his car, which is parked in the driveway. Big mouse traps from my vantage point. I couldn’t imagine what the heck he was doing; a mouse trap competition? Set one off and see if they set off the others consecutively? From my distance, I could see him mumbling to himself and pacing around, maybe NOT a fun competition, I decide, so I give him his space. Besides, crossing his lawn might be dangerous if traps were camouflaged in the deep grass.

Fast Forward
My darn windshield fluid ran out (first time that I can remember) so I asked this very handsome, intelligent young man (my son) to help me refill it. It was the first time I’d ever had to personally open the hood and I had no idea where the release gadget was. He pushed the button and I followed him to the front of the car. LO AND BE-HOLD! Remnants of a rat nest along with excrement (poop) showed I had an unwanted tenant. Who knows how long IT had been there, but it really didn’t matter, there was a RAT living in my engine!

BREATHE
After I calmed down, I had the AHA Moment. My neighbor was a victim of the same squatting rodent(s) so set out a diabolical plethora of devices designed to trap the scoundrel. Instead, the varmint scurried across the yard and took up residence in a new motorized home.

Well. I started to realize that “Ratty” (yes, I gave HIM a name) was probably hanging out because I grew the salads that he ate every day. I had purchased petunias and lovingly planted them everywhere for the cheerful colors. Within two days they were eaten down to the roots. They perished (big surprise). This was taking devotion to gardening to a new level. I bought more plants – this time some spikey blue flowers with feathery leaves and planted them in large ceramic pots. “Take that, Ratty!” 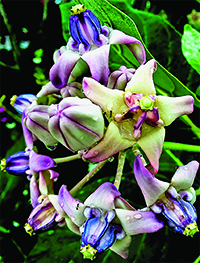 day, all the flowers were gone and most of the stems. He (okay, to be fair, maybe “she”) climbed up those slick pots and had another feast, probably giving high fives to invited guests.

Another thing I noticed was that my hanging bird feeder was emptied during the night. Are you kidding me? Ratty climbed up or down the slick, challenging bark of a coconut palm and had a gourmet sunflower seed dinner while we slept?

Your Mission, Should You Decide to Accept It…
Here’s what I found out. Most people here call them palm rats, but the rats here are really roof rats (Rattus rattus), or called ship rats, fruit rats or black rats (although the ones I’ve personally seen aren’t black at all, more greyish/brownish). They aren’t even native to Florida. Brace yourself – these rats can spread bubonic plague, salmonella and more (AHHHHHHHH!) if a flea bites an infected rat and then you or your pet, or by urinating on your home-grown organic produce…(I feel your pain).

Trees are the roof rat’s homes of choice; they love to nest in the old dead fronds of palm trees or even vine-covered fences and in thick undergrowth. They spend most of their lives off the ground, including using electrical wires as zip lines to other food sources. They’ll start exploring the area after nesting and may try to set up housekeeping in YOUR house. In which case, good luck getting them out of there.

Speaking of nesting, they have up to eight young who are able to reproduce in three months. Each female will have three or more litters per year. (Do the math! That could be thousands of little “Ratties” rummaging through your residential area in a year. That’s something to ruminate about, eh?)

They can squirm through thumbnail-sized openings, chew through sheet rock, lanai screens, wood, metal storage boxes and climb most anything (as I found out) and they’ll eat most anything. We had Ratty gnawing marks in bar soap in the outdoor shower (so much for showering outside now). Watch for signs of “Ratty” in your yard, including gnawed things, missing flowers etc. and after you try the snap-trap technique without luck, call an exterminator. You can see why homeowners devoid their yards of some beautiful specimens; thwarting Ratty becomes a mission.

Another Wake-Up Call
Whatever you do, DO NOT use the sticky black traps! We unfortunately caught a beautiful male cardinal and had to take him to the von Arx Wildlife Center. Luckily, they fixed him up and, unbelievably dedicated as they are, returned him to his neighborhood. Don’t call me if you find “Ratty,” he’s all yours!