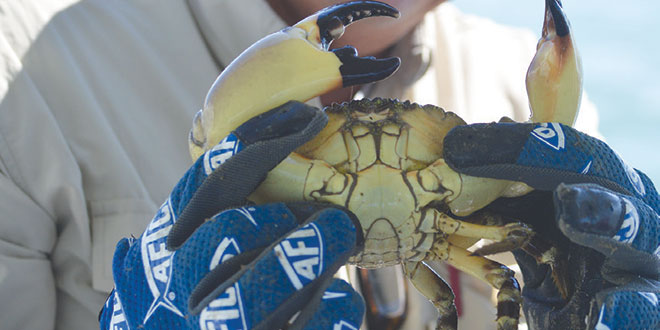 Bob displays a male stone crab for guests to view onboard the Dolphin Explorer. PHOTO BY CAPT. MICHAEL TATEO

Yum! There they are, precooked, and on a plate right in front of me. Just a bit cooler than room temperature, with a side of drawn butter, as well as a mild mustard sauce, I can already taste them and I’m three feet from the table. Those delicious stone crab claws are back in season!

Hundreds upon hundreds of crab traps were placed in position in the backwaters and just offshore during the first two weeks of October all around the Marco Island area. Traps were baited and commercial crabbers waited for the magic date of October 15, the beginning of a seven-month season, to bring their product to market. Collier County waters are especially busy this time of year since the area is consistently one of the top locations for catching this delicacy.

Although the crew on board the Dolphin Explorer is primarily interested in their dolphin research program, we take pride in educating our guests about all area marine life. Thanks to Captain Ted Naftal we are able to pull some of his recreational crab traps to show people what the whole crab looks like and how its life cycle takes place. Here is what they learn.

Stone crab season takes place from October 15 until May 15 each year. Breeding season occurs primarily in the time period not noted above. This gives the female a chance to develop her eggs and assure the longevity of the species in our waters. A seasonal process called “molting” occurs, of which the male crab takes advantage. As stone crabs grow, their outer shell (exoskeleton) does not grow with them, so the crab must shed this shell in order to increase their size. When ready to molt, the crab separates the shell from the body and then backs out. After shedding the old shell the crab will expand the new softer shell by pumping water into its body. It will take about three days for that new shell to harden.

This is a prime opportunistic time for the male to mate with a female. A female will then develop eggs, from nearly 200,000 up to 1 million, and release them in a sponge sack into the water. The eggs are developed in the abdomen and may be seen externally and are generally reddish or brown in color. On the ventral surface (belly) you will find this abdominal area and the female one is much larger and more rounded than the male.

After developing for about two weeks the eggs are released, but they don’t resemble a crab in any way. Nearly microscopic, these developing larvae will feed on the tiny animal life called zooplankton. Their diet will change as they continue to grow until reaching a mature size and then feeding on snails, clams and other invertebrates.

The meat of the snail and clam can be hard to obtain, but the stone crab possess a lethal weapon called a crusher claw. The claws are not equal in size, and the smaller claw will hold the prey while the crusher claw breaks the shell to get the meat. How strong are they? Consider this… a crocodile can produce a bite force of 5,000 pounds of pressure per square inch, enough to grasp a large animal and pull it under water. A stone crab can break through a shell utilizing a force up to 19,000 pounds of pressure per square inch, nearly 4 times more force that a croc! This is why the claw is such a prize…the meaty substance is located there.

In harvesting, a claw must be a minimum of 2 ¾ inches long. If broken from the host properly, a new claw can generate in a year and be of legal size for re-harvest in about 3 years. If both claws are of minimum size or larger they can both be taken at the same time. Most trappers, however, are aware that the survival rate of a crab with no claws is decreased substantially so many will just harvest one claw. Once the claw is removed, the crab is returned to the water for the opportunity to regenerate its limb. With a life expectancy of about 8 years the claws can grow again several times.

Stone crabs are big business in Florida. A banner season of 2012/2013 produced over 2.7 million claws with a value at the docks of more than $25 million. The 2015 crop is already on many tables. The cooked meat looks a lot like lobster and it has a firm texture. The sweet, mild taste is nothing short of a perfect meal. Enjoy!

Bob is a naturalist on the Dolphin Explorer’s survey vessel and is owner of Stepping Stone Ecotours. Bob loves stone crabs, and his wife, very much!