Still Crazy after all these years 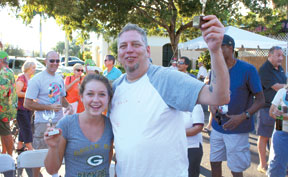 The weekend of November 2 was a busy one for the Crazy Flamingo. Celebrating its 23rd year in business on Marco Island, the restaurant hosted a three-day celebration that culminated on Sunday, November 4 with the annual wing eating competition.

A fixture on Marco Island, “The Bird,” as it is affectionately called by local patrons, has always been known for its ice cold beer, piping hot wings and great live entertainment. Centered around this theme, bands played throughout the weekend to a crowd of all ages. Bill Beck performed on Friday, Reggae band SowFlo played on Saturday and Tripleshot entertained on Sunday. 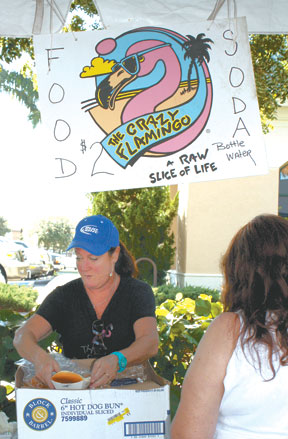 attended the birthday bash were also treated to games, crafts, fresh kettle korn, prizes and a 50/50 raffle. Proceeds from the raffle went to For the Love of Cats, a no-kill cat rescue on Marco Island.

Two dollar beers, dogs and burgers were served all weekend. But the wings took center stage on Sunday as twelve contestants tortured their taste buds as they raced to take down ten HOT wings as fast as possible. The results were amusing and impressive.

Contestant Dominic Martin’s once clean cheeks were covered in wing sauce in moments. Jeremy Cihlar fought the good fight but the heat was just too much to handle. Yours truly 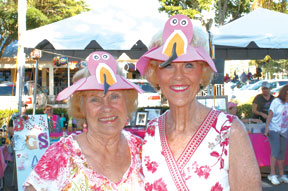 Crazy for the Crazy Flamingo!

was off to a fast start (I’m certainly no stranger to the tasty chicken wing.) Exerting all of my chicken chewing energy early, with only two wings to go, I ran out of steam (Or was it all just coming out of my ears?).

Fifteen year old, Jessica Simon stuffed her cheeks full of chicken, pulling meat off the bones as she chewed. Her serious strategy won her second place overall and first place in the women’s competition.

First place overall went to Mike Korotsky of New York. No stranger to chicken, but stranger to Marco; Mike extended his visit delaying his return to the Sandy-struck Northeast. Little did he 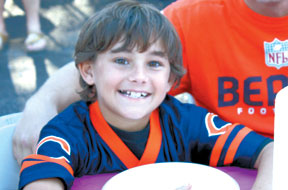 Dominic Martin waits for his wings.

know the disturbance in his schedule would turn into being crowned the Chicken Wing Champion.

General Manager Danny Dawbert awarded trophies to both Simon and Korotsky for their accomplishment. The spirit and enthusiasm at the chicken chow down made owners Jimmy Rainone and Jane Schavone proud.

Adds Flamingo Flock leader, Rose Kriberscheck, “As the Crazy Flamingo kicks into high gear for season, the owners and staff want to say thank you to everyone who came out and supported us on our 23rd anniversary. We are looking forward to a great season and seeing all of those familiar faces once again.”

Visit “The Bird” at 1035 North Collier Boulevard at Marco Town Center Mall or at www.thecrazyflamingo.com