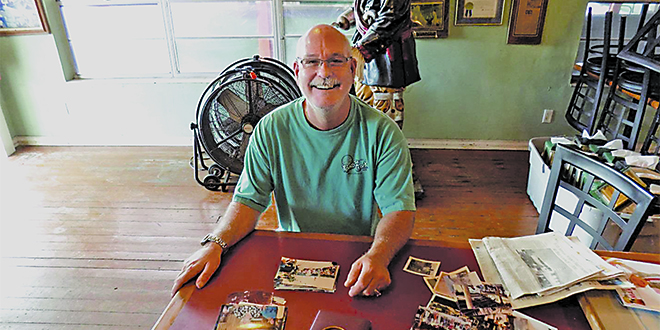 Photos by Barry Gwinn: Steve Gober sifts through some of the hundreds of old photographs retrieved for this article.

Steve Gober is carrying on the family business in Goodland, and, by all reports, is doing a capital job of it. For any success he has had, he is quick to deflect credit to his dad, Stan Gober, whom Steve says has served as his role model in life. Steve still idolizes Stan to this day, and when faced with a hard decision, he asks himself “What would Dad do?”

Stan Gober has put Goodland on the map. Steve, with his dad watching over from above, is keeping it there. Steve and I sat down to begin interviewing for this story on a steamy late September day at one of the tables in the chickee bar of Stan’s Restaurant. Before we could get started, a cute liquor saleswoman came up, hoping to get a big order. She was not disappointed. Steve was not expecting her, but did not hesitate to list a large number of items which he needed, even without any inventory lists in front of him. It was all in his head. After placing the order, Steve recalled his dad doing business at this same table, 36 years ago. I was to learn then that whenever Steve spoke of his dad, which was often, there came a twinkle into his eyes, sometimes the barest hint of a tear, but always a twinkle. This was the first time I had witnessed this transformation. “You know, it’s interesting,” he said, “This is the first table my dad put in out back. He used to sit back here and do business while ordering drinks from the bar, inside. Until about 1980, when he put in the [chickee] bar and a few tables, there was nothing else out here.” Now, 36 years later, the majority of the business is still being conducted at this table. Everything at Stan’s brings back memories of his dad. Steve has an office inside, but seldom uses it.

Steve’s earliest recollections were of a childhood in a small three-bedroom Miami home, where Stan and his mother, Faye, began raising Steve and his two brothers, Russ and Jay. Stan was making a good living as a lineman for Bell South, where he had worked for 23 years. He was also moonlighting as a singing entertainer. “He would sing Sinatra, Como and Bennett to us at home,” Steve said, “And, he sold more phones in 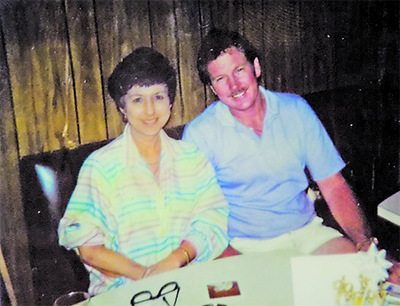 Miami than any other guy. He put all the phones into the Fontainebleau Hotel and got a lot of awards.” Then, in 1968, without consulting Faye, Stan abruptly quit his lineman’s job, sold the Miami house, packed up his family, and moved into two units of the ten-unit Idle Hour Motel in Goodland. It sat across from Stan’s and has since been torn down, due to damage from Hurricane Wilma in 2005.

In the 50s, Stan had started towing a small boat over to Marco Island on weekends, after a Miami neighbor came home with a load of fish from there. There wasn’t much on Marco Island then, but Stan became friends with Herb Robinson, who owned the Idle Hour Bar and Idle Hour Motel across the street in Goodland. Goodland was the most populous area on the island then. “Dad was coming over here to fish, but loved the place so much that he was trying to figure out a way to live in Goodland and make a living at the same time,” Steve recalled, “Dad had been helping Herb Robinson fix up the motel, and in 1969 [after a year of our renting rooms there], Herb was ready to sell. He told Dad that if he could come up with $10,000 down, he could take over the payments and the motel would be his.” Without consulting with Faye, Stan accepted the offer, and ended up paying $15,000 for the motel, using the profit from the sale of their Miami home. “Mom was pissed,” said Steve, “Goodland was a redneck town then – nothing but mullet fishermen and crabbers. It could get pretty rowdy. No one cut their grass.” It was a disaster, and Stan almost went broke. “We were renting out the other eight units (with kitchenettes) at $12 to $15 a day,” Steve said, “Out of season, we couldn’t get any takers. It was grim, but mom stayed and toughed it out with the rest of us.”

In 1970, Herb Robinson asked Stan if he would like to buy the Idle Hour Restaurant. As with the motel, Herb wanted $10,000 down and Stan would take over the mortgage payments. Only this time, Robinson had taken out two mortgages on the building, totaling $90,000. When Stan heard this he told Robinson to “Get out of here. There’s no way I can afford this.” This time, he did 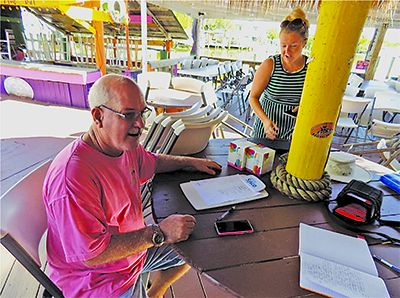 Like his dad Stan Gober, Steve conducts most of his business at this table, the first of many on the chickee deck out back.

discuss it with Faye, and must have been amazed at her response. “You’ve got to buy that restaurant,” she said, “If people eat at the restaurant, they may end up staying at the motel. If they are staying at the motel, they will eat at the restaurant.” This encouragement and short lecture in Economics 101 was all Stan needed to get going. But the Naples bankers turned him down cold. Stan didn’t give up. He had always made friends easily. One of them helped him out now. Lexie Herron, a seasonal visitor from Michigan was staying at the motel and offered to loan Stan $10,000, for 5 years, at 10%. Stan took him up on it and Robinson signed the restaurant over to him. “One year later, to the day, my dad paid him back in cash, in a brown paper sack,” recalled Steve, “I will never forget that.”

Steve Gober was three years old, when the family moved into the motel. In 1970, Stan bought the three-bedroom bungalow across the street at 505 Goodland Drive West, and moved the family there. Steve was a freshman at Naples High School in July 1983, when, after a five-year struggle with cancer, his mother died at the age of 46. “My dad was devastated by this,” said Steve, “She was dad’s partner in life and played a big part in the business. She was his rock. He knew that she would have wanted him to carry on, and so he did.” There was no health insurance and Stan had struggled to pay Faye’s mounting medical bills. The restaurant barely made enough money to cover these additional expenses. “Up to this point, the restaurant was basically just a small bar, serving wine and beer, and a coffee shop serving food,” said Steve, “My parents both hailed from Alabama, and served Southern-style food. They did most of the cooking.” Now Faye was gone, and the Mackle Brothers had convinced a growing crowd of mostly Midwesterners to build homes on Marco Island. The new Marco residents started coming down to Goodland. It was time to expand the
business.

Next edition – Steve Gober, Trained by the Master.