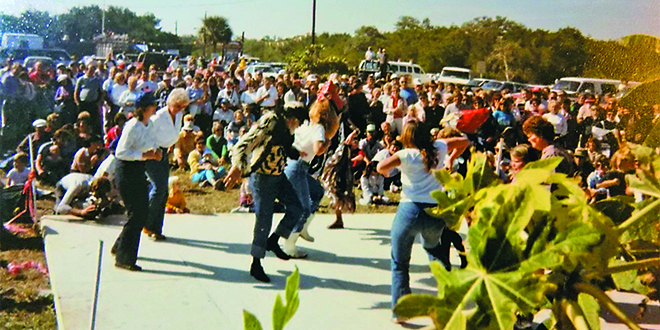 By the late ‘70s, Stan’s Idle Hour Restaurant was doing OK, but it was Stan’s sons, plus Fletcher Addison, who were doing the cooking. Steve, 16, (a Naples High School freshman) and Russ, 26, were in the kitchen at night, and Jay, 21, was the daytime cook. “We were open for breakfast, lunch and dinner – from 7 AM to 2 AM. Dad had trouble getting anyone to help,” Steve said, “We all had to chip in.” The cooking must have been pretty good, because, with the influx of tourists and seasonal residents, Stan started adding tables and a bar out back. “These people want to be outside,” Stan said, “That’s what they come down here for. When you see someone come around the corner [of the building], go up to them and ask where they came from, and when they come back, ask them how they’ve been. Every customer is important.”

Stan tried to supplement his income by taking out fishing parties on his boat. “Things were kind of tight,” Steve said, “I can remember my parents praying on a Friday that the place would fill up over the weekend so that they could pay the mortgage on Monday.” One day Stan returned from a grouper fishing charter trip to find the restaurant in disarray and his wife on the warpath. “There was garbage and trash lying around all over the place. Before dad could yell at my mom about the messy restaurant, she came storming out to the boat with the cash register drawer and threw it in his face. Money was fluttering down all over the place. ‘You sorry son of a bitch,’ she screamed, ‘You’ve been fishing all day. Here’s what we’ve been doing!’ We had done $780 in lunch business, selling $1 hamburgers. Biggest lunch we had ever had. It took a big net and a lot of patience to fish that money out of the water.”

Business was growing, but something was missing. There was no music. Above all, Stan Gober loved music. He especially loved to sing. “He was always singing to mom and us kids,” recalls Steve, “He liked the songs of Perry Como, Frank Sinatra, Dean Martin, and Tony Bennett. I can still remember [dad’s renditions] of ‘My Way’ and ‘I left my heart in San Francisco’ (which later morphed into ‘I left my heart in downtown Goodland.’ Those were happy days.” 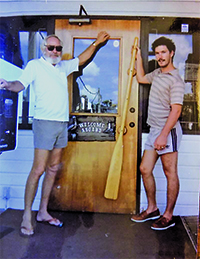 Submitted Photo: Steve Gober, age 17, on an outing with his dad.

add music to the mix. He wanted to bring a band in on Sundays, with him as the vocalist. Steve told him he was completely out of his mind. “I thought he was crazy at the time and told him so,” Steve said, “I told him this would never work. We didn’t even have a stage.” Undeterred, Stan bought a 20’ by 20’ stage from a guy in Goodland, drilled a hole in the back of his pickup, and dragged it over to the restaurant. He put it in the bar downstairs. “Don’t worry,” Stan told Steve, “This is going to be great. I’m really excited about this.” A country western band from St. Petersburg was Stan’s first hire. After that, bands started performing regularly inside the restaurant.

Then in the early ‘80s, A.B. Martin, who owned the Old Marco Lodge, had a brainstorm. “There were seven or eight commercial mullet fisherman operating out of Goodland then,” Steve said, “Some of them docked behind the restaurant.” Only one, Frog Ellington still goes out regularly. Martin suggested a mullet festival at Stan’s. “Dad liked the idea,” said Steve, “The problem was we had no room to stage it beside the restaurant. There was a vacant lot, across the street, but it was owned by Joey Curcie [a local Goodland realtor and developer]. There was bad blood between my dad and Curcie, but a lease arrangement was worked out, and the first Mullet Festival was held across the street. First prize ($200) went to Gary Weeks who had caught 600 pounds of mullet. Frog Ellington had caught 800 pounds but missed the deadline by five minutes, because his engine had broken down. And so Gary Weeks became the first Mullet King, the Mullet Queen got only $50.” Later, room was found for the festival beside the restaurant. The business had grown so much however, that Stan wanted to buy Curcie’s lot for overflow parking. “Dad had been paying Curcie $100 every Sunday for the use of his lot. Curcie was selling a lot of Goodland property, but wouldn’t sell this lot to my dad. A later title search showed Curcie had in fact already sold this lot, but kept collecting rent from my dad anyway. Dad had a lot of friends, one of which was Marco attorney, Glen Tucker. Tucker bought the property from the current owner and quitclaimed it to dad. The next Sunday, Curcie came over to collect the 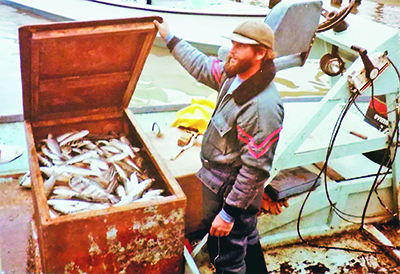 Weighing in at the first Mullet Festival: Young Frog Ellington, who caught the most mullet but lost to Gary Weeks for being five minutes late after his motor broke down. Goodland’s only remaining regular mullet fisherman, Frog still runs out of Stan’s dock.

$100 rent on the lot. Dad told him flat out what had happened and sent Curcie packing. The following day we found that a window had been broken and a hose left on all night inside the restaurant. We couldn’t prove who did it, but 20 years later, having found God, Curcie confessed and offered to pay compensation for what he had done. Dad refused to take any money from him.” Stan took in $1,500 in the first Mullet Festival, more than enough to pay the expenses. He resolved to do something like this every Sunday and gradually the stage was erected in its present location.

From his earliest days in the restaurant, Steve found that he liked the business. He would pester his dad with questions about how things should be done, how things worked. It took a long time for Stan to trust him enough to let him close up at night. He started doing so in the early ‘90s. Whatever you do, Stan had told him, unplug the coffee pot before you leave. I sleep better when the coffee pot’s unplugged, he said. There had been an earlier fire. “I listened to everything dad said, watched everything he did, and did whatever he told me. I wanted to follow in dad’s footsteps,” Steve recalls, “I even got a captain’s license [like dad] and started taking out charters. I was proud of what dad had done and told him so.” “I’m just borrowing this place for a while. I own nothing,” Stan replied, “You’ll probably run it someday. Your purpose in life will be to help as many people as you can.”

“Dad raised a lot of money for local charities on Sunday afternoons. He was fair and straightforward in his business dealings and was always as good as his word. He could always be counted on to pay his help, on time, no matter how the business was doing. He also demonstrated that there were times when you had to say no to [importuning] friends, and business associates. From 1990 to 1997 (when Stan was stricken with cancer) I was constantly by his side. He showed me the right way to run a restaurant.”

Next edition – Steve Gober Takes Over.