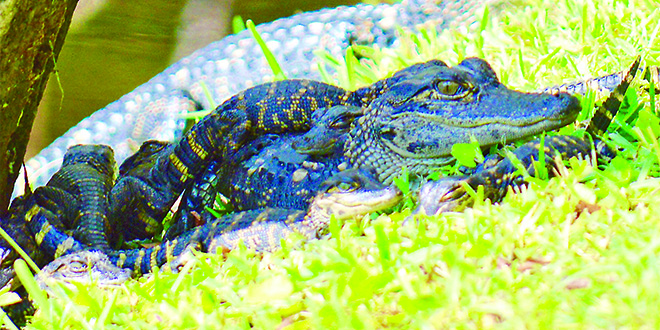 Photos by Bob McConville: This yearling doesn’t seem to be bothered by several hatchlings gathering close by.

Aaaahh! Fall is in the air, and that means many changes are taking place by Mother Nature. I saw my first white pelicans of the season a few days ago, arriving from the now cold northern regions to enjoy South Florida’s winter weather. A few more wood storks are making themselves known as well. In the water, at least six dolphin calves have been identified on the Dolphin Explorer over the past few months. And while guiding people on some walks in the Big Cypress Preserve, I am seeing some more new life…Gator hatchlings are sunning on several canal banks!

Last fall I noticed some hatchlings for the first time on November 19. This year it was a bit earlier, during the last week of October.

Brand new to the world and figuring out how to stay alive, these youngsters have a difficult road to travel. Even prior to hatching, the eggs are vulnerable to many predators.

About 30% of alligator nests are destroyed by high waters during the rainy season, and also by predators such as raccoons. The average number of eggs, called a clutch, in a nest is 35 to 40. Of the nests that survive the elements to produce their young about two-dozen babies will emerge. Only ten will see their first birthday and eight will reach subadult status (4-feet in length). Full maturity occurs at about 6-feet in length, and approximately five will survive to this level. So maturity is not a specific birth year, but rather the physical size.

Alligator eggs are subject to drowning, being inadvertently crushed by the adult female, and are also the target of predators. Raccoons are the main culprits to attack a nest but hogs, river otters and bears can also devastate the population.

The lucky hatchlings that make it from the nest to the water now face a new danger. 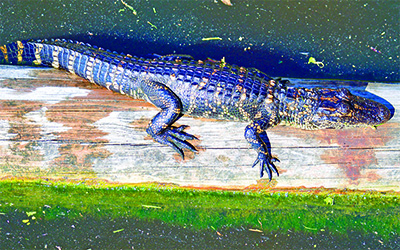 To regulate its body temperature, a yearling suns itself on a post. It has five toes on the front foot, and four on the back, normal for gators.

Some fish species, wading birds, eagles and hawks are now a concern, but their most formidable enemy might be right next to them: their own kind. Cannibalism is common among this kind.

To survive, the juvenile gators feed primarily on insects, small fish and other invertebrates. They must learn quickly in their new environment or they will perish. Hunting tactics of trial and error soon result in success in order to assure longevity. As they grow, their diet expands to include snakes, turtles, birds and small mammals. Because of their docile lifestyle as they grow, not much nutrition is required. An alligator might utilize 100 calories per day, or less. So two Big Macs and an order of fries could sustain them for a week.

Sometimes we see these youngsters on the banks of a canal and other times they will be in the water. This is done to help regulate body temperature. Alligators are “ectothermic,” which means they rely on external sources of heat to maintain proper conditioning.

They are most active when they sustain a temp in the mid 80s. Basking in the sun will keep them warm and sliding into the water will help adjust their body temp and cool them down to their ideal need.

I mentioned that my first sighting of hatchlings last year was on November 19 and, for a full year now, I have kept an eye on two juveniles that have survived. It was quite comical to see several new babies crawling over a yearling recently. The older one did not seem to mind it at all.

Yes, they are very cute to see at this age, but keep in mind that these are wild animals with the potential to weigh over 1,000 pounds and obtain a length of 14-feet. Safety should always be your first concern when encountering any creature in the wild. Enjoy your viewing opportunities but do so with caution in mind, always!

Bob is the owner of Stepping Stone Ecotours, conducting nature and educational walks in the Big Cypress Preserve. He is also a naturalist on board the Dolphin Explorer. Go to steppingstoneecotours.com for more information. Bob loves his wife very much!