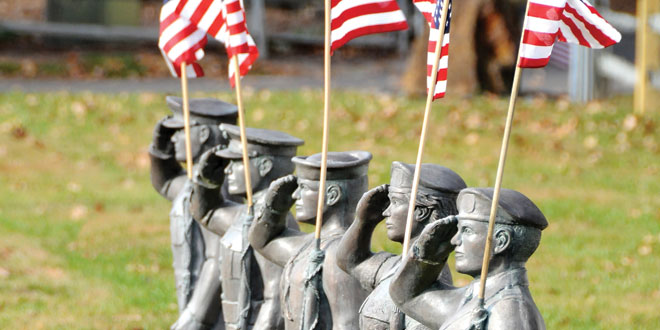 Marco Island is missing something. It’s missing what almost every city, town and village in Europe has – statues of heroes and would be heroes. Some Americans visiting France for the first time, and being unfamiliar with the language, used to ask me about that Frenchman, “Mort”. Every hamlet in France, they said, had a statute of “Mort”. I had to explain that there was probably no one named “Mort” in all of France, its territories and possessions. On a French statue “Mort” is usually and simply part of “Mort Pour la Patrie”, or died for his country.

The question set me to thinking about our fair city. We really don’t have much in the way of statues. There are a few, but nothing like Europe, and nothing like major U.S. cities. In Dublin, for example, there are statues of great Irish heroes, poets, writers, statesmen and numerous others. Statues are terribly important it appears. Indeed, the statue of England’s heroic Lord Nelson was so important that the I.R.A. (Irish Republican Army, not the retirement I.R.A.) saw fit to blow it up in 1946 or thereabouts. They only did a fair job, and the army had to clear O’Connell Street by leveling the remains. Unfortunately the I.R.A. blew out all the windows on the street by using a wee bit too much explosive. The ringleaders were prosecuted, not for bringing down the hero of Trafalgar, but for destroying the windows on O’Connell Street.

The Scots, too, have monuments everywhere. There’s a monument to William Wallace that dwarfs the countryside, and a famous huge memorial to Sir Walter Scott is fondly known as the “Gothic Rocket” since it soars in a great pointed Gothic arch on the side of Princes Street Gardens. In a fairly remote part of the Highlands there’s even a monument to the Commandos who trained in the area during World War II. Try as we might, however, we could not find either the Loch Ness monster, or a monument to the monster.

Just imagine what could be done on Marco Island! There could be a statue of Judge Jolley himself at the foot of the bridge. At city hall it would only be fitting to put up a statue of the original seven city council members. Instead of putting up the flag as in the Marine Corps Iwo Jima memorial, ours could be truly representative by reproducing one of many near-fist-fights. How about a statue of our beloved Herb Savage at Veterans Park showing him leading one of about 40,000 renditions of “God Bless America”? Of course there should be a statue of the Mackle Brothers in Mackle Park. Naturally the city council would require a referendum to do that in the park.

Statues and memorials like those would stir our very souls and give Marco Island status rivaling any burg in Europe. We can visualize visitors coming here just to gaze at our abundance of memorials and monuments. Painted dolphins scattered around and about the city don’t count. Neither does The Blue Man who mysteriously disappeared from city hall and hasn’t been seen since.