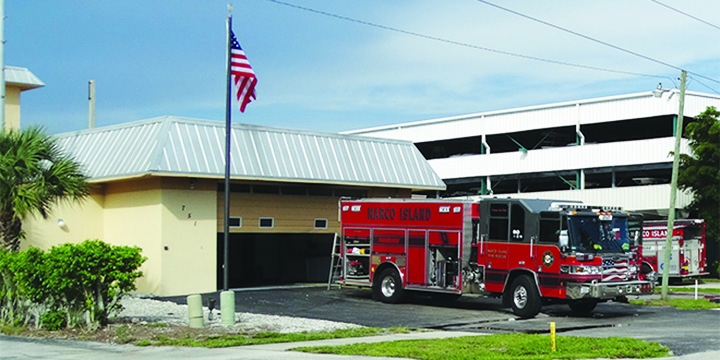 Firefighters respond to a number of incidents each year, some are memorable, while others tend to fade as time passes.

July 7th of this year the crew from Station 51 was returning from a routine medical call to their quarters on East Elkcam Circle.  That crew immediately recognized that something was amiss at their station and began a careful evaluation of what was awaiting them inside the building.

“We immediately knew we had a fire on the interior of the building, the severity and extent was unknown until we made entry after donning all our protective gear,” said Battalion Chief Chris Crossan, who was working that day.

Although the fire damage was isolated to a bedroom off the main apparatus floor, the extensive smoke damage has rendered the building unusable since early last summer. The bad news would come somewhat like Chinese water torture, a drip at a time as the department reviewed their options moving forward.

Due to the age of the building, the necessary mechanical changes needed to bring it into code compliance and the fact that the building itself is below acceptable elevation levels, the rebuilding of the facility is not possible.

“The station itself has been a major contributing factor in being able to improve service for residents to the west of Collier Boulevard in a more effective and efficient fashion,” said Deputy Chief David Batiato.  “That improvement 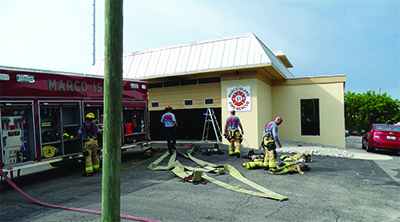 is directly related to improved response times to the area primarily covered by those crews, and in our business time can be a contributing factor to our success in both emergency responses for fire suppression and especially in regards to EMS,” continued Batiato during an interview regarding the need to replace the station.

Fire Rescue Chief Mike Murphy briefed council members on the importance of expediting the replacement of the facility to help maintain response times and provide the necessary response options in emergencies, especially during the busy winter months when the population more than doubles on the island and call volumes increase substantially for the department.

The city has studied a number of options that included donations of land and the use of a small parcel near the North Collier Bridge, adjacent to the Sheriff’s Office Substation. However when all those options were weighed staff still felt that the present site would more effectively meet their needs for an expedited solution. The city will move forward to demolish the obsolete Station 51 as they continue to seek a more permanent solution in the near future.

At their last meeting city council approved Murphy’s request to move forward to acquire modular office building for the temporary housing of personnel to work from.  The temporary quarters would be located on the Utility Department campus off East Elkcam Circle and house the crews previously located at Station 51.