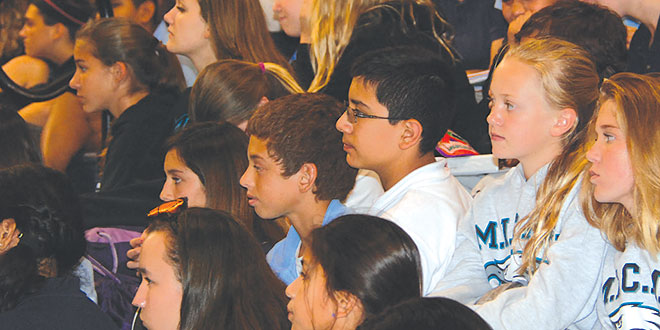 “We want to cultivate a culture of compassion. We don’t want you to grow up being the brightest bullies in the world. We are changing the culture of middle school.”

This is what Marco Island Charter Middle School Principal George Abounader told his students during a recent assembly. It wasn’t just any assembly, though, as there was a special speaker waiting in the wings. A representative from Florida Attorney General Pam Bondi’s office was visiting the school to talk to the students about cyber safety.

In 2007, the Florida Attorney General’s CyberSafety Education Program debuted at middle and high schools across the state, educating students about the risks of and tactics used by online predators as well as what constitutes a cybercrime and how to report it. She discussed proper online conduct, how to guard yourself when playing games online, sexting and identity theft. She also stressed that nothing is anonymous online and nothing is every really deleted.

“The internet never forgets,” she told students. “Everything on the

internet is stored and recorded somewhere.”

A key focus of the presentation was cyber bullying, and the presenter wasted little time, quickly defining cyber bullying, discussing how it can spread like a virus thanks to phones, email and social media and explaining the now legal ramifications of being a cyber bully in the state of Florida.

According to the i-SAFE Foundation, roughly 1 in 3 young people have experienced cyber threats online, and more than 25 percent of adolescents and teens have been bullied repeatedly through their cell phones or the Internet. Last year alone, some 1 million kids reported being bullied online, with the majority of bullies (60 percent) being girls.

When the presenter asked the students how many of them had witnessed instances of cyber bullying while online, about half go the kids raised their hands.

And the problem is escalating. In 2012, some 37 percent of teens reported incidents of cyber bullying. In 2013, that number jumped to 52 percent. In fact, the problem has become so prevalent that 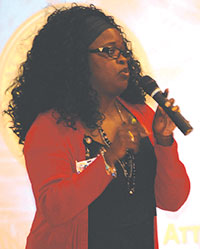 the Florida Legislature passed a law in 2013 allowing schools to discipline students for off-campus harassment, such as cyber bullying, because these instances can disrupt on-campus activity as well.

“Because what you do online impacts the real world, schools can step in now,” the presenter noted, but she also stressed that the students do not have to be victims or just watch the bullying happen. “You have more power than you realize, and you never know what kind of lifeline you can be for someone.”

She urged the kids to “fight back with courage and compassion” by being open about the cyber bullying and making people aware of what is going on. “Tell your parents, school guidance counselors, principals and teachers. They are not just doing this because they want you pass the FCAT,” she added.

Abounader agreed with this sentiment: “We want to be a different kind of school, not just intellectually but also in developing the character of our students.”