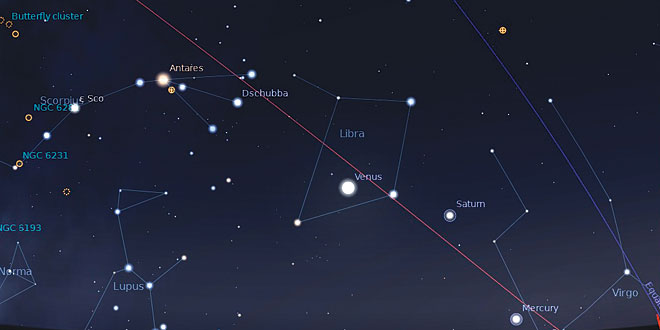 Facing West, 8:00PM September 27. Venus will still be with us for several months but say goodbye to Saturn and Mercury for awhile. SUBMITTED PHOTO

It’s been sometime since we discussed the equipment needed for stargazing. You really need very little, but there are some aids which are very useful. First, you need a dim red flashlight to read any charts you bring outside with you. A red light will leave your eyes’ dark adaptation relatively unscathed; just a few seconds of white light will require your eyes to spend up to 30 minutes to regain their sensitivity. A penlight with a red LED is ideal, several layers of red cellophane over the lens of a regular flashlight works about as well. In a pinch, red paint on the flashlight lens works too!

Next, purchasing a planisphere is very helpful; virtually all serious stargazers use them. A planisphere is simply a map of the sky that rotates around a small rivet. Around the edge of the map are two printed circles – one showing the date and another the time. To use the planisphere, rotate the map until the current date and time line up. When purchasing a planisphere it is vitally important that it is drawn to match the latitude you are trying to use it in. The ones purchased locally in bookstores, for example, are invariably drawn for 40 degrees latitude while we are at 26 degrees. The 14 degree difference makes a huge difference in what is visible in the sky. Proper ones are available on the internet, and while you are at it, pick up the LED flashlight as well.

The ubiquitous smartphones have apps available that do about the same thing as a planisphere and some of these apps are even free. They do a pretty good job, but almost no serious stargazers use them routinely. When I have used them I find the screens are just too darn bright even when they are in “night mode” and only a small patch of sky is visible.

When looking for objects not easily visible to the naked eye, I use a laptop computer running a program called Stellarium. Many other programs are available which do the same thing and may have more features, but the price for Stellarium can’t be beat – it’s free! It can be downloaded at www.stellarium.org. The program is a great deal more flexible than anything found on a smartphone; the laptop screen is still too bright on night mode, but red cellophane fixes that.