Stan’s from the inside out 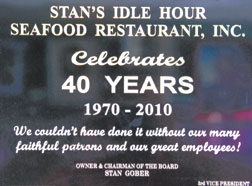 My guess is that many of you’ve been to Stan’s on Sunday afternoon for at least part of the big party that begins with everyone standing for Sandi Patty’s spellbinding rendition of the “Star Spangled Banner”. Then it gets going with food, drinks, jokes and dancing to a great band and winds down at sunset with “God Bless America”.

Maybe you’ve been there for all of the above, but my question is this. Have you ever been inside? Full disclosure, I had not until……..I spent forty-five minutes with Stan Gober – one on one – and yes, we were inside the restaurant itself. Listening to him tell me about his life was a special privilege. And I told him so.

We all know – at least I hope so – that Stan is the man behind Stan’s Idle Hour Restaurant. Well, let me tell you, Stan is anything but idle. He has worked hard, entertained hard, played hard and prayed hard all 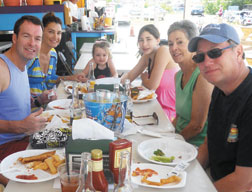 his life. And he isn’t about to stop now.

But I have figured out that hardly anyone ever goes inside Stan’s. You need to. You would learn about the awards Stan has won, the celebrities Stan knows and loves, and about his life – his American Story. He tells his story in his book, but when you are with him in person, you see the twinkle in his eye, sometimes accompanied with laughter or sentimental reflections. And when he says he is blessed, you know he means it. As I walked around outside that day, I did find a family enjoying lunch who actually had been inside. The Naples hostess smiled as she told me, “I always take my guests inside. I want them to know about Stan.”

Often Stan puts on benefits for such organizations as Hospice, Marco YMCA or Habitat for Humanity. The list goes on and on and includes small organizations. I was at the Sunday Show one week when 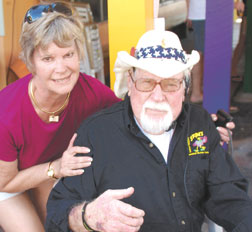 Stan sang his “Yankee Dollar” song, one of many he has composed. Lots of folks put a dollar on the stage for a school team raising funds for uniforms or such.

I had heard that Speaker John Boehner, sends Stan a big flag every year. Stan told me, “Yes, it’s true and the flag is always one which has flown over the Capitol.” FYI –As Stan’s began its 42nd year on January 1, 2012, Speaker Boehner was there! So if you are a first time visitor to Stan’s Sunday Show, you might ask yourself, “How can a man who on the outside seems so carefree, tells off color jokes, writes and sings songs, parties when he feels like it, be so endearing, so down to earth, so honest, so thankful, patriotic and religious?” Check out the inside. There you will find your answer.

Joanie Fuller is the President of the Goodland Civic Association. She and her husband of 47 years, David Fuller, are residents of Goodland.