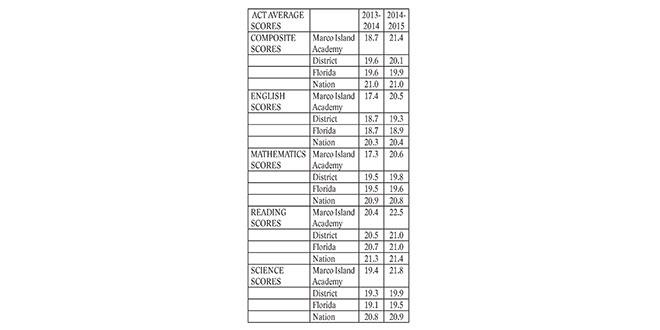 Marco Island Academy’s top administrators could hardly be more pleased with their students’ performance on two standardized testing programs that are a key barometer of academic preparedness for college.

The charter high school recently released its most recent scores for the Cambridge Advanced International Certificate of Education (AICE) tests, which were administered to students in May and June. Also released were the MIA students’ results for the ACT college admissions examination, which is traditionally taken during a high school student’s junior and senior years.

For both, MIA students showed marked improvement in most categories, when compared to the previous school year.

MIA Principal Melissa Scott and assistant principal Amber Prange were overjoyed with the results, but they derive their greatest pleasure from the impact the scores have with the test takers.

“I think it really comes down to watching the students’ reactions,” said Scott. Citing the self-doubt that can arise when teens are presented with a challenge, she said, “When students are able to achieve what they didn’t think they could do, their faces light up. That feeling of pride, it really has nothing to do with us.”

Prange said she’s enjoyed observing the confidence boost students gain from exceeding their expectations on the tests and has seen that success influence their course selections for future school years.

“It really is a trickle-down effect and it’s really impressive to see how they’ve grown as students and as people,” she said. “We’re just really so proud of the kids.”

The 2012-2013 school year was MIA’s first for offering an AICE test. At the end of each course, students sit for an AICE exam, for which they can earn college credit in a particular subject area. Over the last three years, MIA’s AICE testing program has grown and the school now offers AICE’s General Paper, Thinking Skills, International History, Marine Science, English Language, Global Perspectives and Mathematics exams.

The General Paper exam assesses a student’s critical thinking, persuasiveness and mastery of expression in the English language.

IGCSE exams are also administered at the end of a course of study. MIA is teaching and testing for IGCSE English Language, IGCSE History, IGCSE Biology and IGCSE English Literature, which is new for this school year.

Among the highlights of MIA students’ performances were:

In addition, four seniors and seven juniors received AICE diplomas, up from one senior for the 2013-2014 school year. To earn an AICE diploma, a student must study Cambridge AS Level Global Perspectives and Research, with Cambridge AS and A Level subjects drawn from three curriculum areas: mathematics and science, languages, arts and humanities and interdisciplinary and skills-based subjects.

For the ACT, the percentage of MIA students meeting college readiness standards exceeded the average for Florida high schools by almost 30 percent.

Scott, who is in her second year as MIA principal, said college readiness has been a focal point.

“I want our kids to be competitive,” she said. “I want them to know that they can leave this island and compete nationally. They believe in themselves and they believe in their future. That’s our success. It’s all about the kids.”