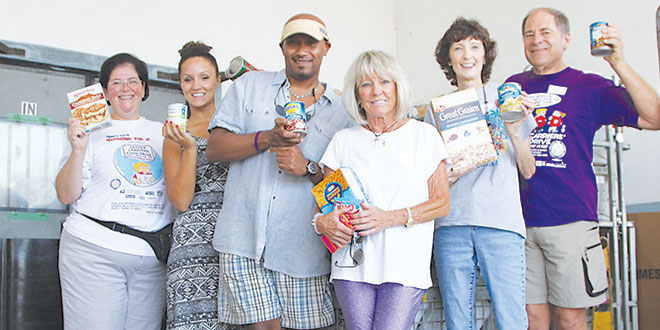 Marco Islanders rose to the challenge by donating enough food to nearly break the 2009 record of 32,900 pounds to the Stamp Out Hunger Food Drive. By the time this article is published, it is expected that number will be surpassed. Residents and guests left bags of non-perishable food items by their mailbox on Saturday, May 9th or they delivered their donation to a post office. 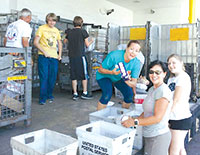 Ron Feelman (missing is his wife and long-time volunteer Yvonne Feelman), Logan and Wyatt Smith in background and Mindy Star Abbey, Lupe Reyes Mercier and Amanda Quinn (missing from this photos is her mom Patty Quinn) in foreground.Missing from the photo is volunteer Hyla and Richard Crane.

food at some of the condominium complexes since February.” Elliott and his wife, Rivka head up the local Stamp Out Hunger Food Drive, “We would like to thank all the residents for their generosity and particularly recognize all the hardworking volunteers.” This is the Mascoop’s tenth year coordinating the National Association of Letter Carriers Food Drive for Marco Island.

The Collier Harvest Foundation is a non-profit agency which manages the annual Stamp-Out Hunger food drive sent trucks to each post office to pick up the food. Collier Harvest delivers food to 40 agencies daily, supporting thousands of families in our communities. Last year, over 250,000 lbs of canned goods were collected for this food drive.