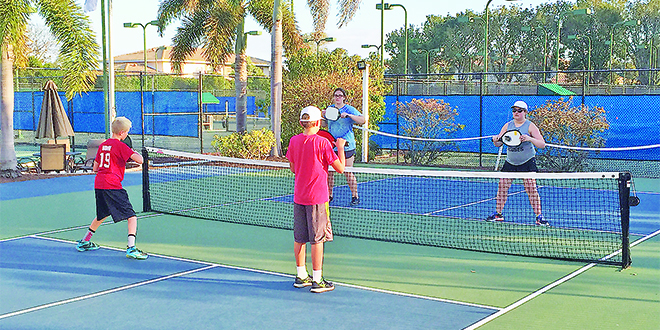 Both teams in proper position at the seven foot/kitchen line, as the point is played out.

In my last column, titled “Proper Positioning is Paramount,” I discussed the importance of having ourselves properly set up in pickleball, to encourage and promote forehands on our groundstrokes.

In that column, I recommended both members of the serving team set themselves up at the baseline area in a position to encourage a forehand groundstroke, on the third strike of the ball.

However, there is a set up option for the serving team, which can provide an opportunity for one of the players to be able to take a position at the seven foot zone line, before, or as the third ball is being struck.

Recently, many beginner level players who have seen this set up being utilized have asked me if it is permitted under the rules of pickleball.

The answer is yes!

In tennis doubles there is a set up, which is referred to as, “the Australian formation.” This is where the server, like a singles player, will move to the center of the court to serve, while the partner will position themselves squatted down in the middle of the service boxes, straddling the center service line. The sever and the partner have predetermined where the serve is going to be placed and if the net position partner will move to either the deuce court, or the ad court, to set up for a possible poach volley off the return of serve. The purpose of this formation is to keep the returner unsure of where the net position player is going to move, keep them guessing on where they need to go with their return, and to hopefully throw off their rhythm in the process. While the theory is a great one, the actual execution of the whole affair requires not only sound communication and coordination between the two players, but competent skills by the server, to be able to effectively and efficiently place the serve where it is supposed to go.

There is a similar setup in pickleball, which is referred to as “stacking.” Stacking in pickleball is where the server’s partner will stand in an area just outside of the sideline at the seven-foot, no volley zone, aka “the kitchen line.” The servers will position themselves near the center of the court to serve. When the return of serve comes back over, the server is responsible for hitting that third ball, which remember, in pickleball must bounce before a player can strike it. Once the ball, which was hit by the returner, has passed the kitchen area, the server’s partner will then step into the court taking a position at the seven-foot/kitchen line. The server, after making the third strike of the ball, will then proceed to make their way to the seven foot/kitchen line and be ready to play the point out from there. This now gets the serving team into a position with both players at the kitchen, as soon as or sometimes sooner than the returning team.

As I stated before, the theory of this strategy is a great one, but the actual execution of the whole affair takes sound communication and coordination between the two players, as well as competent skills by the server, to be able to effectively and efficiently place the serve where it is supposed to go. The server must also be agile and quick enough to be able to cover the entire court on the return of the return, aka the third strike of the ball.

The main purpose of this strategy is two-fold. Like the Australian formation in tennis, the idea is to keep the returner unsure of where the net position player is going to move to. It also allows the serving team to get in an offensively sound position at the kitchen earlier; because the servers partner does not have to wait and see if the return of serve is coming to them, they can immediately position themselves at the seven foot line.

As with all new strategies, stacking must first be practiced to be able to efficiently and effectively be executed as a strategy in competition. Also, as stated before, the server must have the ability and be competent enough in their skills to be able to effectively place the serve where it is supposed to go. A good serve is a critical and crucial part of successfully utilizing a stacking formation in pickleball. Players need to have an understanding of proper grips and fundamentals of the serve motion.

The reason I am so adamant about the serve is because if a team is set up in a stacking formation, and the server hits a weak/non-well placed serve, the returner can take advantage of the open court created from only one player being available to hit the next shot. Also, if the server’s partner is not confident and comfortable with his abilities to execute dinks and volleys in both an offensive and defensive nature, the serving team will find itself in a very challenging situation, which will, unfortunately, most likely end up being strategically unsuccessful.

Like the Australian formation in tennis, stacking in pickleball should not necessarily be used on a full time basis, but as an option on certain points to keep our opponents guessing.

Advanced level players, in both tennis and pickleball, utilize various forms of the Australian formation and stacking, from both the right and left sides of the court.

As an instructor, I believe it is a strategy that players of all levels should understand and be aware of.

I also strongly recommend you fully understand and comprehend its complexities, as well as the risk involved, if not implemented properly.

I would not recommend randomly utilizing either the Australian formation or stacking in a social, round robin or rotational play situation. It is a game plan/strategy that must be coordinated and perfected, through practice and drilling with your partner.

Finally, I want to compliment all of the young players who are participating in my Island Kids Tennis. I have implemented the sport of pickleball as a daily part of their training, and I have seen improvements in their skills as tennis players being directly attributed to their participation in the sport of pickleball. And most importantly, they like to play pickleball, because it is such a fun game.

Wayne Clark is a professional tennis instructor with over 25 years experience coaching players on all levels of the game. Wayne is also qualified in pickleball instruction. He has been the head instructor at the Marco Island Racquet Center since 2001. The Racquet Center offers clinics, private and group lessons for both tennis and pickleball. Coach Wayne’s Island Kids Tennis juniors program runs year-round and has classes for players from kindergarten through high school. Contact Coach Wayne by email at coachwayneclark@aol.com, or by phone or text at 239-450-6161.