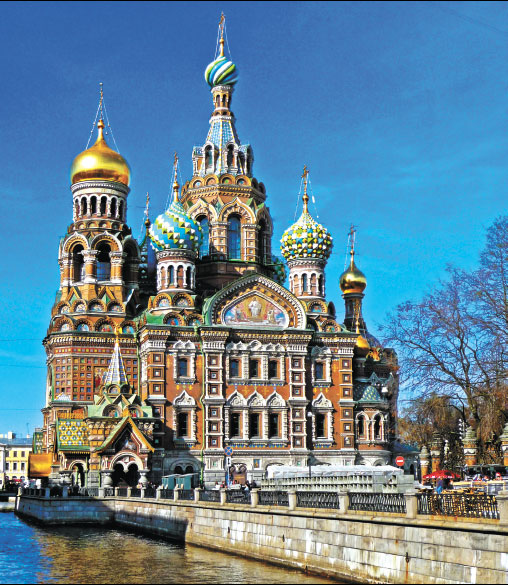 The colorful mosaics of the Church of the Savior on Spilled Blood hint at the splendor to be found inside.

St. Petersburg, designed by Peter the Great to emulate a grand European city, has also been known as Petrograd and Leningrad. In 1991, by a majority vote of 52%, its name was returned to the original St. Petersburg. It served as the capital of Russia from 1713-1728 and 1732-1918. Although Peter studied in Amsterdam and used it as his model in fashioning his city, St. Petersburg’s 68 rivers and canals, 42 islands, and 300 bridges have earned it the nickname, “Venice of the North.”

Of great consequence in the city’s history was the siege of Leningrad. During World War II, known as the Great Patriotic War, the city was blockaded and attacked by the Nazis for 900 days. There was almost no electricity, water and heating and minimal food. More than 1 million civilians died from shells, starvation, or disease. One third of all of the homes were destroyed, as well as many of the palaces. Today, survival and triumph are celebrated on Victory Day, May 9th. For days before the holiday, the city is festooned with flags and banners. Military personnel pour into the city for the many ceremonies leading up to the big day.

After the war, emphasis was placed on restoring monuments and major palaces. As one tours the grand palaces, guides emphasize what is original and what has been restored. Extreme effort went into the restorations. For example, to ensure that the recreated silk was accurate, a research center was opened in Moscow. Original looms were located and the designs were copied from the furniture, drapes, and wall coverings that were preserved.

Because most money and efforts were placed on restoring the monuments and palaces after the siege, little was left for housing, so there was a grave shortage. When Kruschev came to power, his goal was for every family to have a home, and cheap, quick prefab apartments sprung up. A five

Smolny Cathedral, part of a convent complex, in St. Petersbug.

story Soviet style building could be constructed in one month. In less than 5 years, 50 million people were provided housing and rent was about 5% of their income. These quick fixes were only supposed to last 20 years, but 50+ years later they are still evident. Through the years and with privatization better housing became available and reportedly about half the families in St. Petersburg own summer homes known as dachas.

In 1998, there was a severe financial crash in St. Petersburg. Recovery came only with the ascension of Vladimir Putin. A native of St. Petersburg, he visits frequently and has channeled many resources into restoring it to its previous grandeur. There is restoration going on all over the city. Tree lined pedestrian malls are being constructed, building facades restored. St. Petersburg seems on a path to grow stronger and more beautiful every year.

As in most large cities, there are some impressive churches. The must see is the Church of the Savior on Spilled Blood, so named because it was built on the location of the assassination of Tsar Alexander II. It’s exterior mosaics and multicolor domes hint at the splendor to be found inside. St. Isaacs, the third largest domed cathedral in the world also has an interior worth exploring, while a climb up its colonnade offers an unparalleled view of the city. Brightly colored blue or yellow onion domed churches are found throughout the city. Among the finest are Smolny Cathedral and St. Catherine’s. 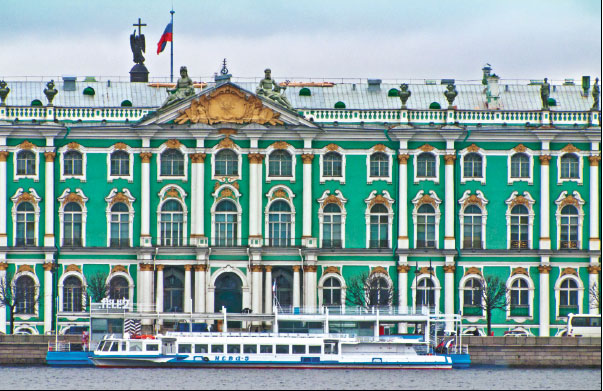 A small portion of The Hermitage, once the Tsar’s winter palace and now repository of one of the world’s greatest art collections.

the last tsar of Russia, and his family executed in 1918.

The Hermitage, 1,000 rooms encompassing 4 buildings, is one of the great art museums of the world. The Winter Palace of the Tsars is the main building and worth visiting just to see this magnificent edifice. The complex can be overwhelming and it is amazing to think that only a small percent of the collection is on display. If visiting on your own, try to time it to arrive noonish, after the deluge of morning tour groups. The Russian Museum, housed in yet another of St. Petersburg’s grand palaces, has an impressive collection of Russian art.

Neoclassical palaces in the city tend to be yellow and light grey while baroque are usually blue, green, or pink. Peter the Great ordered that the nobility build their palaces with the facades facing the river, so a cruise of the canals and rivers is recommended. The tour boats are very low to the water because of the low clearance of the bridges. There is outside seating on the boats, but given that St. Petersburg receives about 24 inches of rain a year, you might find yourself confined to the inside and somewhat poorer visibility.

Nevsky Prospekt is St. Petersburg’s grand boulevard lined with historic buildings and former palaces including that of Count Stroganov. Yes, beef stroganoff is said to be named after his family. A lavish and interesting palace to tour is Yusopov’s along the embankment of the river off of Nevsky Prospekt; it is where Rasputin met his fateful end.

Two trips worth taking outside of the city are to Catherine Palace and Peterhof. Catherine Palace, 25 miles away, with its blue, white and gold exterior, was built by Tsarina Elizabeth. Despite its ornate, gilded interior, there were originally no bedrooms. Elizabeth feared conspirators so she didn’t want anyone to know where she slept. Twenty minutes before retiring, she would 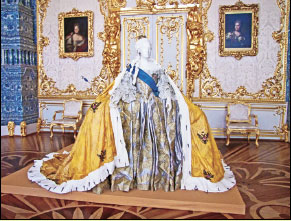 One of Elizabeth’s many gowns on display in Catherine’s Palace, the summer residence of the Tsars. She reputedly never wore the same dress twice.

tell her servants in which room to set up her bed for the night. The amber room, decorated with tons of amber in various shades and designs is amazing.

Peterhof was Peter the Great’s summer home on the Gulf of Finland. Patterned after Versailles, the grounds have 150 fountains all run by gravity so they could operate 24 hours a day without using a lot of power. Badly damaged during World War II, as was Catherine Palace, Peterhof is just about completely restored. A dramatic approach to Peterhof is by hydrofoil from docks near the Hermitage. The alternate bus trip takes you along a road that incredibly once contained some 500 grand houses and palaces. Almost all of them were destroyed during the war. Only one, Constantine Palace, was reconstructed by Putin; the president and foreign dignitaries use it when visiting St. Petersburg. In 1997 it was host to a G8 meeting.

The department store/mall, Gostiny Dvor, housed in what looks like a yellow palace on Nevsky Prospekt has a good choice of souvenirs on the ground floor. There is a souvenir market adjacent to the Church on Spilled Blood, but the one at the Peterhof generally had lower starting prices.

The restoration of St. Petersburg is an ongoing process. Everywhere there were hints of what is to come; tree lined pedestrian malls, more and more shops and restaurants opening. St. Petersburg is on track to bring increasing change and vibrancy and I look forward to visiting it again sometime in the future.