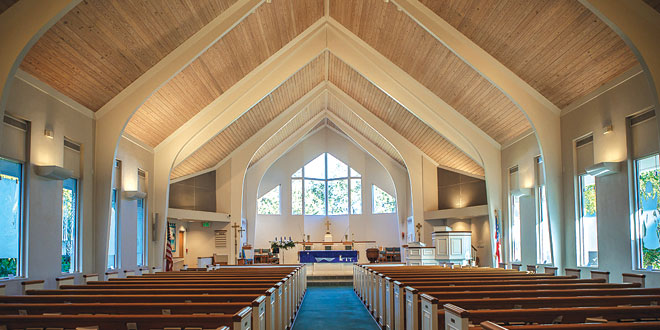 The Artists in Residence at St. Mark’s Episcopal Church have done it again. Over 20 members within the congregation have created myriad mediums of artwork since 2008 – all representing the life of Jesus Christ. It’s fifth project celebrates the current season of Advent – the coming of Christ – the reason we celebrate Christmas.

The group’s fifth project, entitled “Incarnation Windows,” is an incredible sight to see. Not only does it show the growth of artistic talent among the AIR group, but it represents the coming of Christ in spectacular fashion – through the medium of etched glass.

Internationally known fashion designer and etched glass artist, Stan Saran, Marco Island resident, helped bring the detailed windows to fruition, along with the help of Donnie and Elaine Jones. Janet DeAnna, co-chair of AIR, alongside Hannah Ineson, admits, “Stan, Elaine and Donnie did most of the heavy lifting,” as etching panes of glass is no easy task.

However, the window designs, ten in all, came from the work of AIR members. “We put out a call to the Artists in Residence and the congregation as a whole,” adds DeAnna. “From there, 10 were selected, but we had to bring a prototype to Stan to see if he would be willing to do the work. Coral (Corky) Miller created the scene ‘Mary visited by Angel.’ We brought it to him, and he said ‘sure.’”

And so AIR got to work. Every artist drew their version of scenes from the Advent season: Mary and Joseph traveling to Bethlehem, the visitation of the three magi, shepherds being called by the angels, Angel Gabriel visiting Mary and more. “Father Kyle, our priest, came up with the concepts. He’s so encouraging of the arts. He recognizes we do have a talent, and he wants to utilize it in worship. He likes that, and we do too.”

On Sunday, December 1, the Incarnation Windows were introduced during all three services at St. Mark’s. The dedication was beautiful. “Every window was covered by a white cloth,” explains Stan Saran. “Father Kyle sang, and as he did, the cloths were pulled down by the artists one by one.”

“It was incredibly moving,” adds DeAnna. “Father Kyle wrote poetry, or lyrics really, to explain every window. Shane Totten put them to music, and as Father sang, the curtains were pulled when it came to their verse. It was beautiful. People cried. I cried for our artists. I felt so proud of them all. Everyone stood and applauded.”

The windows will hang throughout the Advent season and be taken down on January 5. The church invites visitors to see the windows as a part of their Advent and Christmas Experience. It is open Tuesday through Friday from 9 AM until 4 PM for anyone to stop by and enjoy the amazing works of art. Placards beneath the windows offer a commemorative message or verse from the donor(s) who helped bring the windows to fruition. All are welcome to come to Sunday services as well to sneak a peek – and worship. Services are at 8:30 and 10:30 AM. On Christmas Eve the windows will be lit from the outside for an even finer look at the detail of them all.

After January 5, the groups fourth project – created last year – will be rehung in the windows for the season of Epiphany. The medium for this season: stained glass. DeAnna explains, “We wanted to try stained glass so we visited (Donnie and Elaine Jones’ stained glass studio) and realized this would probably be too difficult for us. But Elaine taught us a simpler method, and they gave us thousands of pieces of extra glass. That’s how we found them and how they found us.”

The Jones’ introduced AIR to Saran as Donnie has now been mastering the trade of glass etching through Saran as a mentor.

AIR continues to step up its game with every project. Its first came five years ago where artists used different mediums – oil, watercolor, clay, shadow boxes, etc., to signify the Stations of the Cross for the season of Lent. This tells the story of Jesus’ final days to his death on the cross to forgive all of their sins.

The second project was for Advent, as are the etched windows. AIR members used shadow boxes to depict these scenes. “It was sad to retire them now that we have made the etched windows,” adds DeAnna, expressing her love for all the artwork and artists that have shared in the AIR journey.

The Stations of the Resurrection was the third project for the group. This falls just after Lent, telling the story of how Jesus rose from the dead after dying on the cross. Cloth pictorials were made and hung in the windows as well.

This certainly isn’t the end for the Artists in Residence at St. Mark’s Episcopal Church. “During Lent this year, we will be focusing especially on the needs of a leper colony in the Philippines; Culian Island. We have supported them for many years. We have made them the focus for Lent, for which I have made chalices and a paten, which is the plate upon which communion bread is served, in an unusual fashion. (They) represent the bacteria of leprosy, which might sound a little gross, but it’s quite pretty. We don’t sit around here at St. Mark’s, we’re moving on to the next thing.”

Whatever it is, it is sure to be pleasing to the eye for backgrounds of all kinds to enjoy and to hopefully bring them closer to the peace which passes all understanding that is the backbone of the Christian faith.

To learn more about the stained and etched glass artists, visit Don and Elaine’s website at www.donandelaineartglassstudio.com.

The Incarnation Windows are hung in order of the story of Christ’s birth. As you face the alter, the first scene starts on the right. The second scene is hung on the left. All ten alternate back and forth until the culmination of the season of Advent.

Window Titles and Artists from beginning to end:

1. Word Made Flesh by Elaine Jones
2. Gabriel’s Visit to Mary by Marion Nicolay
3. The Angel Visits Joseph by Judy Crook
4. Mary Visits Elizabeth by Katie Goetzman
5. The Road to Bethlehem by Cathy Weiss
6. No Room at the Inn by Peggy Anuta
7. Shepherds Harkened by Angels by Coral Corky Miller
8. Mary Pondering by Janet DeReiseis
9. Gift of the Magi by Shane Totten
10. Visitation to Us by Victor Abbott