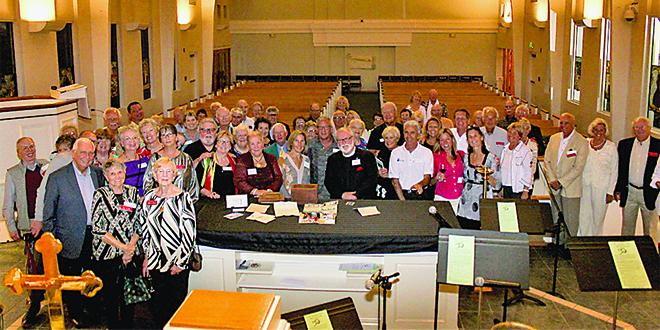 In celebrating its 50th anniversary, St. Mark’s Episcopal Church unveiled its time capsule, marked to be opened on February 10, 2017. This was history in the making, as the time capsule was planted underneath the pulpit 25 years ago inside the Parish Hall. As guests celebrated the anniversary of the church building itself, it is known that there has been an Episcopal Church presence in the Marco Island area since 1898. With this much history in a community, there are many things to be appreciative for throughout its history on the island.

The Living Water Legacy Society (LWLS) hosted this generous event for those who have personal endowments in the church. These donations are to be accepted and then distributed to continue funding the church’s special projects. This church building dates back as early as the Mackle Brothers settling the land and allocating funds to be dispersed to denominational properties. It was this $60,000 that flourished into the building that stands today. Today, the LWLS exits to recognize those who made it possible for the vision of the original founders to thrive.

The original pastor Michael Durnning, who buried the capsule 25 years ago, was in town with his wife for the memorable event. Durnning spoke a few words before heading into the parish hall. “What’s important is that we are cementing a timeline in history. Doing God’s will, often you’ll not have the resources required.” Durnning stated. “We must continue to work, give and pray.” During the event, it was also a time to begin thinking about where your financial 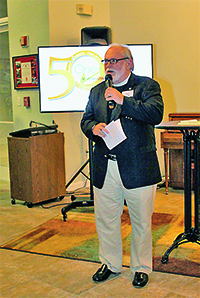 distributions will be settled. Guests were encouraged to revisit their estate plans and asset allocation.

The new year also called for new nametags. Among the names of members, Paul Tateo received his 2017 badge. He is in the lineage of the great Helen Tateo, who was involved in the church school opening in the early years of the building’s history. After members were given new nametags, the final countdown for the time capsule’s reveal, commenced. During this time, members had a moment to greet one another and introduce themselves to new guests in the audience – an opportunity to explain the church’s values further to newcomers. This coincides with the church’s inclusive approach to its surrounding community.

Once it was time to reveal the time capsule, guests migrated to the parish hall in high spirits to witness what contents were found inside the box. After a few words from Father Kyle, the box was removed from its buried location. Among the various contents inside the capsule: a collage from highlights and media coverage of the church in 1993, which included a newspaper article, a VHS tape of the accomplishments the church, and a photo of Father Michael Durnning in the 90s, with a note for the audience. Which makes you wonder, what contents would be included if the church were to bury another time capsule? This was certainly a night to remember.

Saint Mark’s Episcopal Church is celebrating its 50th anniversary. To find out more about upcoming events and getting involving with the church, please call 239-394-7242 or visit
www.stmarksmarco.org