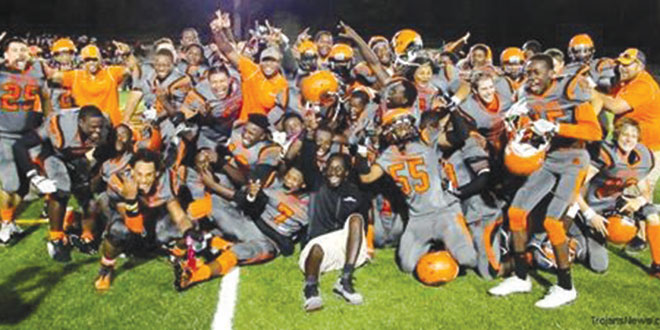 An all-star in football, basketball and track, 2003-2006, his efforts took him to the University of Wisconsin where he was a standout linebacker. His life’s trail brought him back to Lely High School, becoming an assistant coach to Stacey Stewart in 2012, working with the defense.

In 2013, he got the nod as head coach, making him the second straight Lely grad to take over after alum Stewart resigned. Joining his staff was Rolf Bathold. The two, along with the late Ereck Plancher, led the Trojans to a come-from-behind win over Naples in 2005 and a trip to the regional playoffs. Unfortunately, they lost to Riverdale in the first round. It had been a dream of the three as they grew up in the shadows of Lely to one day play for the Trojans and defeat Naples.

Plancher’s young life came to a disheartening end when he collapsed at a voluntary spring football conditioning session at the University of Central Florida in 2008. More than 3,000 friends of Ereck’s, young and old, joined in the memorial service at Lely High School.

Because of his special qualities, on and off the field, the football team determined that Plancher’s jersey number 5, would not be retired, but worn by a worthy player each season.

“We talk about Ereck and what he stood for at the start of each season,” St. Jean said. “He is always in our mind. The athlete is chosen by his academic effort and behavior on and off the field.”

The first honoree was Jeff Charelus, Plancher’s cousin. This season it is senior wide receiver Daniel Obidiegwu. “He embodies what Ereck represents,” St. Jean said. “The jersey is not given out lightly; it has its demands.”

In his first season as head coach, St. Jean’s team won four games — something that hadn’t been done in a number of years. Thus far this season, they are 7-3, with a five-game win streak. The biggest 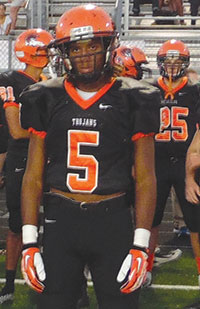 win being against Immokalee, 28-7, at Lely to win the Class 5A-Disrtict 15 championship. It ended a 17-year title drought.

The win over Immokalee also meant something special to St. Jean as he and his buddies had not beaten Immokalee while players. St. Jean was quick to note that Lely had only lost twice while he was playing, that hurricane seasons canceled the other two games.

To St. Jean and his team, it was also unfinished business for them. With less than two minutes left in the game, a questionable referee’s call cost Lely the victory in 2013, giving Immokalee the title.

“We got it tonight,” St. Jean texted after the game.

A hard-rushing offense and a fast, punishing defense are this year’s trademarks. “We thought that running was our best dynamic, although we are capable of passing,” St. Jean said. “We have a strong line with multiple running backs to touch the ball. We are also capable of passing.”

Senior quarterback Lik Estilien is the leader of the pack. Although they throw very little, Estilien did have a three-game streak in tossing a touchdown pass. Tupac Isme and Marvin Liberiste are the key running backs.

“It is good to have a winning streak going into the playoffs,” St. Jean said. “It helps build confidence and makes our players want to improve every game. They are getting to understand what it takes to be successful.”

It changes the fans, too.

“There is a new atmosphere growing at the games,” St. Jean said. “We want to bring the back the tradition of success like it was in the 80’s when there was great talent.”