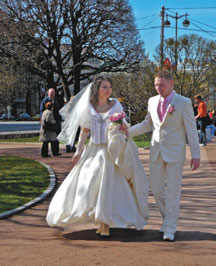 Young couple in St. Petersburg after saying “I do”.

Although we have traveled semi independently in other areas of Eastern Europe, we had never been to Russia. Perhaps growing up in the days of the Cold War still resonated and influenced our decision to book a tour, albeit one that gave us quite a bit of free time, rather than seeing the country independently. Having now spent a few days in both St. Petersburg and Moscow, there is no question in my mind that we would have felt very comfortable negotiating these cities on our own.

English is not readily spoken, but with a few words of Russian in my vocabulary, I found everyone willing to try to communicate. The transportation system of metro and trolley cars in St. Petersburg was easy to use, with metro stops in English as well as Cyrillic, the Russian alphabet. The Moscow metro was larger, with more lines and much busier. Stops, for the most part, were written only in Cyrillic but with a good map in my pocket as well as maps at all the stations and lists of all stops at each track, we easily found our way. Knowledge of the Cyrillic alphabet was helpful. In both cities, it is best to arrange taxis through your hotel.

In Russia, things can sometimes seem a bit more disorganized, yet other undertakings are quite ordered. Schedules and availabilities change often and are explained with a shrug and the comment, “this is Russia.” At many museums, only a certain number of people are let into a room at a time and then the room is cordoned off. It did enhance the viewing as we didn’t have to fight crowds around popular objects and it is probably good protection for the treasures.

I’ll write more about St. Petersburg and Moscow in future columns, but my impression of both was very favorable. The first Russian Tsar to visit Western Europe, Peter the Great, founded St. Petersburg some 300 years ago. His desire was for the city to mirror the style of the west and he even ordered Russians to dress in the European fashion. Although the revolutions, 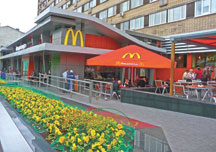 Hungry for McDonalds? This one in Moscow is one of the largest in the world.

wars, and neglect of the 1900s were not kind to St. Petersburg, today Peter’s success is evident, as I felt as if I were in any other Western European city, albeit one that is quite imperial.

While St. Petersburg is opulent with a hint of old world elegance, Moscow is more “down to business”. It is an active, bustling city. Think Vienna/Paris vs New York. I even felt the difference in our hotels, although it might have been more to do with the corporate policies of the differing major chains than their locations. In St. Petersburg, we had free WIFI, complimentary computers available, and many amenities. In Moscow, one of the most expensive cities in the world, WIFI was $10 an hour or $30 a day and amenities minimal. St. Petersburg staff was all about being solicitous and making our stay as pleasant as possible; Moscow was more about business and what we could and could not do such as not being able to charge anything to our room. Even our luggage in Moscow fell prey to bureaucracy. It was delivered to our rooms two hours after our arrival. Our group had traveled from our cruise ship to the hotel by bus. There was a tight portico area in front of the hotel which was too narrow for the buses; previously a bus from this company had been damaged trying to squeeze into the small space. Instead, our bus driver would park only around the corner, just a few yards from the main entrance. The hotel, however, refused to send the bellmen out to the bus because it was their policy that baggage be unloaded at the main entrance. Finally, after what were many phone calls and threats from the cruise line, the bellmen were sent to the bus to retrieve the luggage.

We traveled in early May and the weather was bone chilling in both cities with two days of rain. Although people commented that spring was late this year, our guide in St. Petersburg noted that the local saying about the weather is “nine months of anticipation; three months 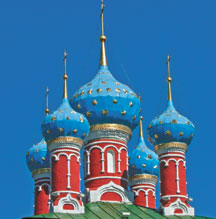 of disappointment.” In Moscow, our local guide said their wisdom was that Moscow had two seasons, “white winter and green winter.” Temperatures in summer, however, can be high, as is the humidity.

May 1 and 9 are huge holidays in Russia, May 1 being equivalent to our Labor Day while the 9th is Victory Day. During World War II, known as the Great Patriotic War, more than 20 million Russians, our Allies, died; it is said that there is no family who did not lose someone. Great homage is paid to veterans of this war and monuments and memorials are found throughout both cities as well as in smaller locations.

Dining options range from fast food to fine dining and a wide range of international choices. All of the American fast food outlets are here. Russian fast food includes kiosks and chains that sell blinis, thin pancakes, with an assortment of fillings, pelmeni (dumplings), kebabs known as shashlyk, and stuffed baked potatoes. There seems to be a least one coffee shop on every block, as well as many small eateries specializing in sushi.

Soups including the well known borscht (beet soup) are popular, as are a variety of zakuski, or appetizers. You can spend hundreds of dollars at a first class restaurant such as Palkin in St. Petersburg or select from any of the many more reasonable small neighborhood restaurants featuring Russian, Italian, or Asian cuisine. Some of the local places are difficult to identify. Often signage is poor and all you can see is a door leading to a small foyer; the restaurant is downstairs.

Major department stores have excellent souvenir departments and fair prices. Souvenir markets seem to spring up wherever there are tourist stops. Better prices are available at some of the out of the way places and I’ll share them when I write about the individual cities. Bargaining is de rigueur at stalls and small shops. When a price is quoted to you, ask for a “skit-ka” or discount. Popular souvenirs include the ubiquitous nesting dolls known as matryoshkas, hand made chess boards, carved or painted lacquer boxes, painted 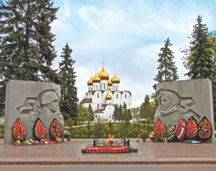 Virtually every city and town in Russia has at least one memorial to the Great Patriotic War (World War II).

wood bowls, colorful wool scarves, amber and other jewelry, replicas of Faberge Easter eggs, and modern icons. It is illegal to export antique icons and any icon leaving the country must have a certificate attesting to its age from the Ministry of Culture. People in our group were hesitant about buying even new icons, however, we passed through no inspection upon our departure from Russia; I don’t know what the reaction of the US customs would have been had we indicated an icon on our list of purchases.

Despite the fate of religion under the Soviets, at times it seemed that the number of churches and monasteries rivaled Italy. Certainly both the exteriors and ornate interiors of many of them equaled if not exceeded any we have visited world wide.

I would happily return to Russia and if you haven’t been there yet, I would recommend it. We found its residents to be hospitable and helpful. We traveled about the city with no fear. Of course, you do have to take the normal precautions you would take in any city. I did hear of one man who was pick pocketed on a busy trolley. However, he was the epitome of tourist, wearing a track suit, white athletic shoes, and paid for his less than $1 ride by taking a wad of cash out of his pocket and ostentatiously waving it about. If you travel to Russia, do as we did and learn a little about the history before going; it made much of what we saw more meaningful. Netflix and other video outlets offer some excellent documentaries on the history of the Tsars as well as the Russian Revolution.

To visit Russia, you must have a Visa.