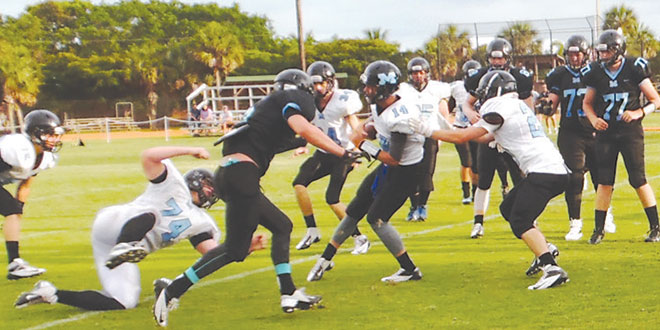 Oops! A number of Marco Island Academy football players, are caught watching a play, rather than being involved in it, during a scrimmage on a Friday night when Deerfield Beach-Zion Lutheran canceled at the last minute.

On a balmy Friday night, May 15, Marco Island Academy football fans walked onto the field at Winterberry Park. They were anxious to see what the next season may hold as the Manta Rays were to play their spring game against Deerfield Beach-Zion Lutheran.

The referees chatted as they readied to have the opportunity to work a game, after being idle for more than six months.

But wait, they were only talking with coaches and players from the Rays. Zion Lutheran wasn’t on the field. In fact, they weren’t even on Marco. In the waning afternoon hours on Friday, Zion Lutheran had called to cancel.

“At that point we decided to

MIA quarterback Andrew Fowler gets a throw off in a team scrimmage.PHOTOS BY ROGER LALONDE

have a scrimmage instead,” Coach Greg Fowler said.

Quarterback Andrew Fowler was the play caller for the white and black-jerseyed teams. He threw three touchdown passes, and overall looked like the QB who led the area in passing yardage last season.

Patrick Michel and Tyler Gresham led the offense, as expected. Michel made an all-out diving catch for a 47-yard gain as he scored twice for the white jerseys, while Gresham crossed the goal line three times for the black jerseys.

“If this is how our spring ends, without playing a game, I am fine with it,” Fowler said to his team after the scrimmage.

The Manta Rays will record a first when the 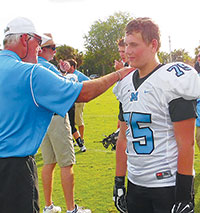 Assistant coach Win Headley gives MIA’s John Roche a pat on the shoulder after a play.

team travels outside of Florida to Texas to play Edgewood (Texas) in the Brook Hill Classic in Bullard, about 100 miles southeast of Dallas on Friday, August 28.

The Rays will play at the Brook Hill School’s 2,500-seat Herrington Stadium. The Classic, in its sixth season, will have games each weekend night.

It is a major step for a football team in just its fourth season, following the likes of Naples and First Baptist Academy, by hosting or going out of Florida to play teams from another state.

“It will be an outstanding weekend of football,” Fowler said. “The kids are looking forward to the game and we are proud to be part of the Classic.”