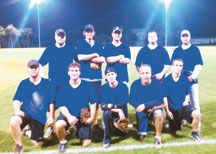 Winterberry Park and Tommie Barfield Ball Park host an adult softball league with teams that are sponsored by eight local establishments. The teams play every Thursday night at either 6:15 or 7:30 at one of the parks. The current teams are Cocomo’s, DaVinci’s, Joey’s Pizza, Nacho Mama’s, Islander Pool, Marco Island Brewery, NeNe Kitchen, and Kretch’s. It’s a great chance to watch competitive play and to come and root for your friends or favorite restaurants. Apparently, local rivalries between restaurants can be settled by hits and RBI’s; as well as, food sales and customer satisfaction. Although, the number of teams in the league may be small, there is no shortage of excitement. Everyone has a shot at the playoffs.

The games can be high- scoring affairs. On December 15th at Tommie Barfield Park, DaVinci’s ran up the score on Nacho Mama’s and beat them 15-3. Nacho’s was light on the hits, but they did have a slew of difficult outfield catches. Three of those praiseworthy grabs were by Matt Hopkins. DaVinci’s player, Ray Neil, ran home in the 5th and scored their 15th run of the game. That play effectively ended the contest triggering a courtesy rule.

The following game resulted in a similar conclusion after Ne’s put up a whopping 23 points to best the Islanders. The final outcome was 23-3. Paul Thomassen of NeNe’s and Matt Hopkins for Nacho’s both expressed how much fun they have every week. They hope to play again next year. The teams always appreciate a good crowd, so next Thursday get out there and support your local businesses and athletes. It is always a great time.

The 2011 Lely Girls’ Varsity volleyball team did something that no other team has done before them; they became district champions. The girls’ achievement was just what the doctor ordered. Their play has been the highlight of the school’s sport’s program this year, since the Varsity Football Team finished with just one win and the upheaval of their coach’s resignation. The girls’ volleyball coach, Dan Selvey, on the other hand, is looking to “grow more as a coach” and definitely plans to return next season. The victory came after they beat Estero to claim the district’s top spot.

Being an underdog in some of their matchups worked to their advantage; they hadn’t won against Naples in the past 16 years. Of course, that all changed this year when not once, but twice, they bested Naples. The players spoke of their coach as a very enthusiastic mentor who preached to them three things; discipline, great fundamentals, and always taking everything in steps. The Lely High principal, Leslie Mooris, also spoke highly of Dan Selvey telling of his great passion for the team’s success. Dan, who has been coaching at Lely for four years, made it known how important it was for all five seniors from last year to play again this year. That mindset of the girls coming back together to play again is a crucial part of the building block of a team. Dan explained that this team was special due to a few core philosophies. “It was never about just one player” and “Respecting each other and getting along on and off the court”. The simplified college style offense that he incorporated was very effective in getting the team farther than they’ve ever gone before.

The starting seniors, Lisa Feola, Hannah Skotzke (Most Improved), Alexandra Meurgue (Player of the Year), Shiree Dangler, Jessica Johnson, and Samantha Howard will be gone next season; however, they have all made it very clear how important this year was to them. With them moving on to various colleges and career paths, this was still a bittersweet way to end their high school run. Mary Gibler and Katie Roche, who were very important to the success last season are juniors and hopefully, will return next season to give it another shot. The seniors will be remembered and are now moving on to bigger and brighter futures. Let’s hope that 2012 brings Lely even more success on the court.