There are a lot of places in the world that one can think of which offer a very spiritual place to ride a bicycle. I suppose for the riders in the Tour de France it could be the Alpe d’Huez. I am sure for people who have ridden in California it could be riding along the Pacific Coast highway. These places give a cyclist a sense of peace and in fact, many places where cyclists go may offer spiritual comfort. What many cyclists may not know is there actually is a spiritual place beyond the places where they choose to ride which provides a good feeling.

It is a little chapel atop an 1800 foot mountain above Lake Como in Italy, the Church of the Madonna de Ghisallo, the patroness Saint of bicyclists. As legend has it, one night the medieval Count Ghisallo was walking along the roadside when bandits suddenly attacked him. He saw an apparition of the Virgin Mary and he ran towards the vision to escape his attackers. The apparition became known as the Madonna del Ghisallo, and she became a patroness of local travellers. In 1949, a local priest, Fr.Ermelindo Vigano managed to convince Pope Pius XII to admit her as the patroness Saint of cyclists.

For many years the chapel has been seen by many spectators around the world, as well as the many riders who race in the Giro d’ Italia and the Giro D’ Lombardia. These races have kept the tiny chapel in the forefront of the cycling community. The interior of the chapel is adorned with pictures of many local parishioners and many cyclists who have fallen in the sport of cycling.

The most notable cyclist is the local hero, 1992 Olympic champion Fabio Casartelli, who crashed and died during a descent of the 1995 Tour de France. His crumpled bike is displayed in the chapel. His teammate at the time, Lance Armstrong, went on to win stage 18 of the race that year and dedicated his win to Fabio by pointing to the sky in his memory. A picture of Mario Pantani, another Italian cycling hero, on stage receiving an award for winning the 1998 Giro d’ Italia is 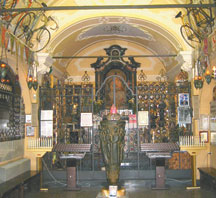 prominently displayed in the chapel. Pantani suffered deep depression from being banned from the sport he loved and he later died.

The bicycles of many other notable cyclists adorn the ceiling of the chapel, including those once ridden by Felice Gimondi, Gianni Motta, Francesco Moser, Gino Bartali and Eddy Merckx. Many world championship jerseys also adorn the wall from notable cyclists such as Mario Cipollini and Gilberto Simoni. The newest addition is that of the Barloworld jersey and picture of South African cycling champion, Ryan Cox, who died suddenly in 2007. An eternal flame burns near the entrance of the chapel in honor of all cyclists.

As the popularity of the small chapel increased and the need for more room for cycling artifacts became apparent, a cycling museum was built in 2006 close by on the mountain top. The building itself is in total contrast to the small chapel, being ultra modern and actually cut into the moutain side with large plate glass windows with breathtaking views of the Lombardi hills below. As construction neared completion, Pope Benedict the XVI blessed the final stone to be laid inscribed with the words: “Omnia Vincit Amor” (Love conquers all). Inside, the museum houses a wide variety of cycling artifacts, a massive chart of the history of cycling and many old newspapers including that of L’Auto from 1903, announcing the start of the first ever Tour De France. You will also see many more bicycles on display like one from Italian bicycle company, Bianchi, their 1947 bicycle which is said to be the first aluminum racing bike ever built.

Whether you have a religious persuasion or not, I believe as a cycling fan, you will find some sort of peace as you are surrounded by all the history and reverence for the sport of cycling. I have never been to the Chapel of the Madonna de Ghisallo, but I know on my next visit to Italy it will be on the top of my list.