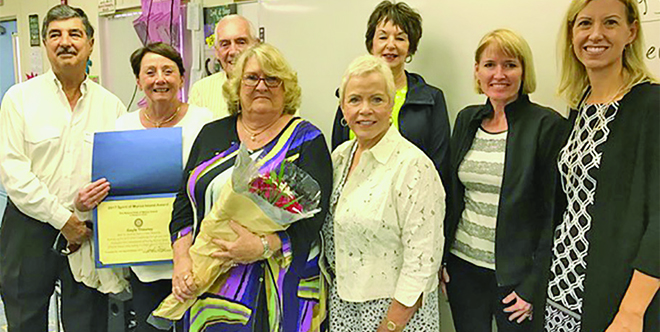 The Noontime Rotary Club of Marco Island has announced the names of three additional selections for the 2017 Spirit of Marco Island Awards. The honorees are Scott and Jayme Lowe and Gayle Thawley. They will be formally recognized at an Awards Dinner to be held on Sunday, April 2, 2017.

Scott and Jayme Lowe were both caught by surprise with their selection at a recent YMCA gala fundraiser held at Hideaway Beach. Tarik Ayasun, the president elect of the Noontime Rotary Club of Marco Island, along with several members of the club who were also in attendance made the announcement in front of nearly 150 guests.

The Lowes were recognized for their contributions to both the Marco Island Charter Middle School (MICMS) and the YMCA. Scott Lowe, who is the CEO of Physicians Regional Healthcare System, is a director of the Marco Island Charter Middle School Board, where Jayme Lowe also generously volunteers her time as the MICMS nurse. In addition, both serve on the Board of the YMCA. Jayme is the 2018 president elect of the YMCA board and both have contributed a great deal of their time to both organizations, as well as other civic activities.

Gayle Thawley was also completely taken by surprise when a group of Rotarians led by Pat Rutledge made the announcement of her selection at the Marco Island Academy High School. Also joining in on the surprise were Jane Watt, the president of the Marco Island Academy Board, Melissa Scott the school’s principal, as well as several board members; Brenda Rhinehart, Dianne Wetjen and Kim Barry.

Scott and Jayme Lowe and Gayle Thawley, along with previously announced winners, John DeRosa, Louise Russell and Bruce Greav will all be formally presented with their 2017 Spirit of Marco Island Awards at a Gala Awards Dinner and Silent Auction to be held on Sunday, April 2, 2017 at the Bistro Soleil Restaurant located in Old Marco. The proceeds from the event and silent auction are used to support local charities and scholarships.

For more information and tickets to the event, you may contact Al Diaz at 438-5285 or by email at royalmarcoway@
marcocable.com.