The common snook (Centropomus undecimalis) are the most widely distributed species within the Centropomus genus, and have been reported as far north as New York (USA) and throughout the Gulf of Mexico. Common snook are abundant along the Atlantic coast of Florida from Cape Canaveral south through the Keys and Dry Tortugas, and north to Cedar Key on the gulf coast. Common snook occur infrequently along the coast of Texas to Galveston and then more or less continuously south to Rio de Janeiro, Brazil.

Here in the 10,000 Islands, Snook are greatly sought after by near coastal and back country sport fishermen. The attraction comes from their difficulty to locate and catch, and for their lightning fast strong runs and amazing jumps after hooking up with them. 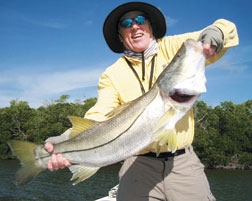 Van Sayler with a Snook.

snook on the Gulf Coast of Florida. The largest observed sizes for females on the Atlantic and gulf coasts are 43.5 inches and 40.6 inches, respectively. The world record for a common snook caught on hook and line is a 53-pound 10-ounce in Parismina Ranch, Costa Rica.

An interesting fact about the Common Snook is that they are protandric hermaphrodites, meaning that they change from male to female after maturation. This transition is identified by the presence of both male and female sex cells in the gonads and takes place when they grow to between 9.4-24 inches in fork length, which corresponds to 1-7 years of age. The majority of small common snook are male and most large snook are female. Males reach sexual maturity during their first year at 5.9-7.9 inches fork length. Research shows that female gonads mature directly from the mature male gonads shortly after spawning. The probability that a common snook of a particular size will be a female increases with length or age.

Rick Roberts of the Snook Foundation (www.SnookFoundation.org) states that the incredible rise in the number of fishing trips in FL (estimated 30,000,000 this year alone) ensures the accuracy needed in data has become extremely important. Without Fishermen, the rules and regulations are set by scientists and technicians who are not out there fishing every day. Rich says that we are left with little recourse other than to complain about the unfairness of this process. Rick recommends that all readers 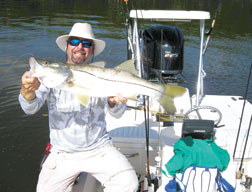 Capt. Pete Rapps with a Snook.

will be helping the cause and themselves by logging their catch at www.angleraction.org I have used this web site to record data that will be beneficial to the future of our Snook populations.

Snook took a hard hit in January of 2010 when we had 10 consecutive nights of freezing temperatures. Many of our local shallow bays were exterminated of Snook as the water temperatures fell into the 40’s. Since then, Snook have been illegal to take, and the FWC continues to monitor their recovery.

Here is a history of Snook regulations in our local areas:

Local anglers reported some of the best Snook fishing the area has seen since the freeze and Snook Kill of January 2010. We look forward to their recovery as time goes by. Stop in you local bait and tackle shops to get the scoop on what and where the Snook are hitting, or hire a local guide to put you on some.

Thank you to Rick Roberts at the Snook Foundation, and to the Ichthyology Department at the Florida Museum of Natural History for supplying information in this article.

Capt. Rapps has been fishing the Chokoloskee area for just over 20 years. He offers expert guided, light tackle, near shore, and backwater fishing trips in the 10,000 Islands of the Everglades National Park. You can book a charter right online 24/7. See the online availability calendar, booking info, videos, recipes, seasonings, and first class web site at www.CaptainRapps.com and you can reach him at 239-571-1756.

Fishing Forecast for May