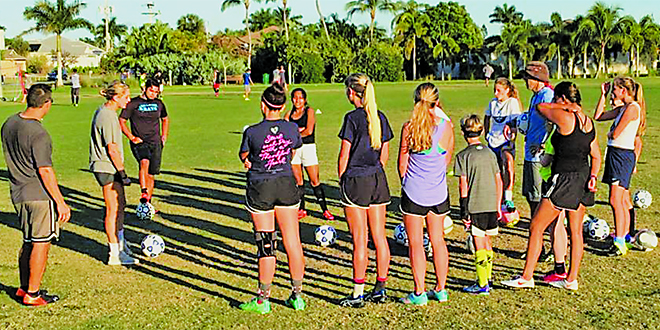 Photos by Jane Watt: Krystina Iordanou passes on some kicking tips to the Rays.

Krystina Iordanou and Morgan Stearns showed up at the Lady Rays practice on January 5th. They were two of the stars of 11th ranked University of Virginia (UVA), which had just completed a 15-5-2 season and went all the way to the quarter finals in the Division 1 NCAA soccer tournament. Both of these women have been receiving high accolades and recognition since high school and will enter the draft for the professional National Women’s Soccer League.

Krystina is the daughter of Dinos and Marianne Iordanou, Marco residents and benefactors of the Marco Island Academy (MIA). Marianne is the newest member of the MIA board of directors, and has always had a soft spot for high school athletics. She arranged for the visit by the UVA stars. By all accounts, it was an inspirational time for the Lady Rays. Coach Jim Watt was impressed with what Iordanou and Stearns had to say to his team. “This was one of our best practices of the season,” Watt said, “[Iordanou and Stearns] gave pointers and tips, and shared two drills used at UVA. They empowered and instilled confidence in the entire team.”

Krystina worked with the defense, emphasizing containment and Stearns worked with goalkeeper, Kayla Kladis, who had attended a goalie summer camp in August, but gushed about the advice and pointers she got from Stearns. “She told me how to position myself in most situations and urged me to forget about my mistakes,” Kladis said, “She said that all goalies make mistakes and I shouldn’t let it affect the rest of the game. She really gave me renewed confidence in what I was doing.” Coach Watt felt that Kladis got more out of this practice then she did out of the goalie camp last summer in Chicago.

Krystina Iordanou and Morgan Stearns were impressed enough with the Rays and what they had accomplished that they are making a gift to the girls soccer program. The UVA players wanted the Rays to have full size practice nets, rather than the smaller ones they had been using. Krystina and Morgan learned what the MIA coaches and fans have long realized. One can’t be around this team without being captivated by their grit, determination, and closeness to each other.