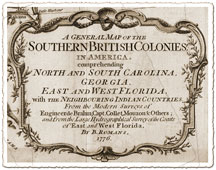 While most know that the Spanish discovered Florida and that the U.S. later purchased it from Spain, few know that for 20 years England owned and controlled the state, which they divided into East Florida (the peninsula) with its headquarters in St. Augustine, and West Florida (the panhandle) with its headquarters in Pensacola. These twenty years were a critical time for the U.S – from 1763 to 1783 – the years encompassing the American Revolution, a time when life might have been much easier if an ally like Spain and not England controlled the area south of the colonies.

Soon after the British took control of Florida in1763, they had it “surveyed” – that is to say, they had maps made of the coastline showing the mouths of rivers, inlets and bays. Hired as the Surveyor General was William Gerard de Brahm who renamed the large “Bay of Juan Ponte de León” – located north of Cape Sable and south of Punta Larga (large point) with a more proper English name of Chatham Bay. He also added other English names to the area such as Delaware River – in the area of Collier Seminole State Park and Youngs River – in the area of Everglades City.

The English next engaged Bernard Romans – who had served as deputy surveyor for de Brahm, but had no liking for the man, probably because Romans was not paid for the work he did for de Brahm. In discussing de Brahm’s book Romans, says: “…this narrative deserves contempt…. Evidently bearing marks of insanity, demands our pity…” and with sarcasm, refers to de Brahm as a “singular genius.” He blasts de Brahm for re-naming coastal locations: “Nothing can be more absurd, or productive of confusion, than the assuming new and fantastical names in places of so much danger; yet the author of a certain pamphlet, published two years ago, has done this at no small rate.” Romans did his mapping of our area in the first part of the year 1771. In doing so he noticed that Punta Larga had not been renamed by de Brahms, interestingly Romans apparently had no reservations about naming it after himself, he added Cape Roman to his map, later changed on Spanish maps to be the current Cape Romano.

Romans described in detail numerous ideas of how money could be made in the new Floridas (East and West) including bee-keeping, raising cotton, making indigo, producing special dyes from the bodies of insects, raising plants for medicinal purposes, the salt business and many other possible ventures. He specifically researched and described the “Pescadores Grandes” (Spanish large commercial fishermen), who used thirty vessels from ten to forty tons each during the months of September to March. Their main fishing grounds were the waters of Southwest Florida, plentiful due to the estuary system of the Ten Thousand Islands. Romans was not pleased by how the English handled this area of Florida: “… the extensive fisheries in the power of these colonies, with which they now supinely, not to say stupidly, allow the Spaniards to run away. The whole of the west coast of East Florida is covered with fishermen’s huts and flakes…” (Platforms built to dry fish.)

He described the Spanish bureaucratic regulation and taxation of this industry: a history lesson that confirms for us that some things never change! Cuban fishermen, in order to sell 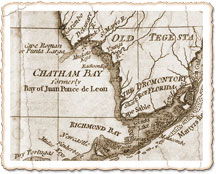 fish in the Havana market, first had to pay for and obtain government issued licenses specifying the quantity of fish that could later be sold. Only then could they purchase the salt required to cure their fish from the official government warehouse. Romans reports that the official rate was twelve “rials” (the currency in Cuba) or $1.50 at the time for less than two bushels of salt (one “fanego”). The government warehouse was kept full of salt due to the efforts of these same fishermen who were required to sail to Cay Sal (Salt Key) now part of the Bahamas (located northeast of Cuba), purchase salt there, load it onto their boats and bring it back to Havana, where the government paid them 3 rials or only 37 cents for the same approximate two bushels they would later re-purchase for four times as much! The salt in Cay Sal was produced in large swallow ponds laid out so that fresh saltwater would flow in at high tide and then was blocked off. Evaporation, as well as prevailing winds that drove the water into foam at one end of the pond, allowed the extraction of salt in large quantities. Romans’ vision for commercial salt cultivation in Florida was not achieved until over sixty years later in the 1830’s when the Key West salt ponds opened.

In addition, the Spanish fishermen were required to purchase their entire supplies for the seven months of fishing at the official government store. It was reported that, while some supplies were purchased, many fishermen chose to purchase only the bare necessities planning to catch their own food and on foraging for supplies when they got to Florida. One of the oldest names on maps in North America is “Caxymbas” or now “Caxambas” a Spanish name given to the southern part of Marco Island where the fishermen knew they could obtain fresh water.

The bulk of the cargoes the fishermen returned with were filled with red drum which Romans reported the French call poisson rouge (Redfish), and he remarked that if they can get Pampanos (Pompano) the price is three times as high as for any other fish. Rounding out the normal catch would be “a few soles, some sea trout, and the roes of mullets and black drum” along with “no inconsiderable quantity” of “oil from the liver of nurse and sharks.” Romans explains that the roe of mullets and black drums were “put into a pickle for about a quarter of an hour, then taken out and partially dried by the sun, then pressed between two boards and smoked in a small hut using corn cobs” as fuel (it is unclear where they obtained any corn cobs). The Spanish are said to be very fond of this roe and “use them instead of cavear.” Of the huge quantities of mullet netted, they only took the roe and tossed the rest of the fish. Romans reported that the “sounds” or air bladders of sea trout could be dried to make a “glew” which he called a “perfect and fine ichthyocolla” – a word that is now archaic and means a gelatin used as an adhesive.

Fish that were being kept for sale were brought on shore, cleaned and gutted, then layered and packed with salt. The salt pulled the moisture from the fish creating brine, and after about a week or two made the flesh of the fish translucent. 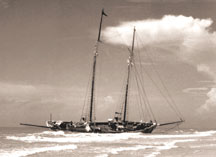 The filets would be washed and pressed to squeeze more moisture from it as well as to lighten it and then hung up to dry on wood hooks suspended by “strings of silk grass from flakes or stages.” The wind and the sun would dry it completely in about a week. Spanish fishermen salted about a thousand tons of fish each year. This was clearly big business and was a major supply of food for the Cuban markets for literally centuries. After the fishing boat was full, they would return to Havana where there was a further government import duty of 2 . percent to be paid. On the sale of the cargo, the net proceeds (after all costs and taxes) were split up into 1/3 for the owner of the vessel, and the remaining 2/3rds split 20% to the ship master and 80% divided among the crew. In these calculations Romans notes that two boys were counted as being equal to one man or each getting a half of a share.

To make extra money in Havana, the fishermen would catch colorful song birds along the shores of Florida building cages for them and reselling them in the Cuba markets where they were in large demand by the women of the cities. Another author of the time said that the gooey sap from the Gumbo Limbo tree was used to make a “bird lime” which applied to limbs of bushes and trees caused small birds’ feet to get stuck and allowed their live capture.

Entrepreneurs established permanent fishing “ranchos” along Florida’s Gulf Coast, most of which extended between Tampa and Marco Island with Charlotte Harbor as the central area. These fishing ranchos, operated by settlers of Spanish nationality as well as Indians, assisted the Cuban fishermen with food and water, as well as provided extra manpower for the netting and curing of fish. In 1836, as the Second Seminole War advanced down into SW Florida, petitions from the owners of the ranchos that they were really U.S. citizens were ignored by the U.S. Government. Spanish rancho workers were forced back to Cuba or to other Spanish colonies and their Indian co-workers forced to relocate out west. Due to the number of mixed marriages at these ranchos, this resulted in many personal hardships.

The demands of the Cuban fish market continued to be so strong that the loss of the Spanish fishing ranchos along Florida’s Gulf Coast did not stop Cubans doing what generations before them had done: commercial fishing in our area. Modernization resulted in a newly designed vessel – the “Cuban Smack” with a lower area in the hull that allowed water to flow in through the bottom to a certain set depth. This allowed fish to be transported live, saving the tremendous expense and time of salting, although fish such as Spanish mackerel and cobia (pelagics) still had to be split and salted as they could not be transported live in tanks. Ice replaced salt in the early 1920’s as the preservation material of choice and the Cuban Smacks were reported to have been able to handle about 20 tons of ice, and the need to salt fish to preserve it almost ceased to exist. As U.S. commercial fishing based out of Key West and other ports along Southwest Florida grew, the Spanish commercial fishing for the Cuban market slowly died out along our coasts as did the knowledge that they had ever been here.