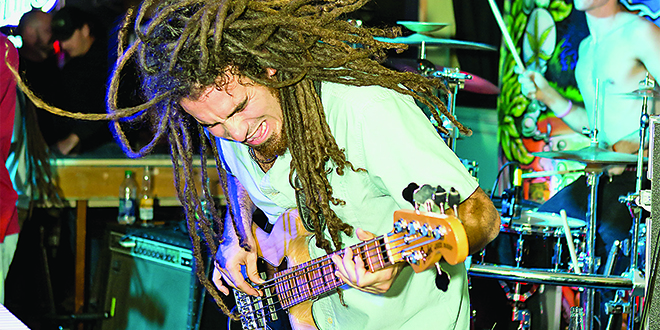 Photo by: Frank Steiger |Although Sowflo is currently performing at a reggae festival in Jamaica, a story and photos from a recent performance featuring the entire band can be found here. Sowflo’s Christian Yacono performs with emotion as seen above, with Wes Mitzelfeld on drums behind him.

At the end of October, I had the opportunity to see an area band, SOWFLO. The performance SOWFLO put on for the rousing crowd was nothing short of great!

Everyone around here has been mentioning SOWFLO for a few years. This was my first time attending their performance and I LOVED them. It has been ten weeks since, and I’ve seen them twice more and can’t wait to see them again. The music is reggae, but clearly rock influenced. If you like either genre, you’re in your element. I hate to use the word fusion but whatever these guys call it, there is a reason SOWFLO has toured nationally since 2012. What used to be a local band is quickly gaining popularity across the country, from Florida to California. You better get to see them quick while they’re still accessible locally!

Recently SOWFLO announced an upcoming trip to the birthplace of reggae, Jamaica. A Southwest Florida band…performing AT A REGGAE FESTIVAL in Jamaica…REALLY?!?! How great is that? While in Jamaica, they’ve reserved studio time to record at none other than Bob Marley’s infamous studio, Tuff Gong International, where they will cut a new song to be released in spring this year. It is all a testament to SOWFLO’s talent and ability.

Each performance is better and more inspiring than the last. More so, because this band is from our own backyard. Christian Yacono is an islander. He went to school on Marco Island and graduated from Lely High School. Many in the audience know Christian. (Certainly, everyone knows the Yacono name.) Even as a young teen of 13 years old, Christian was carving a name for himself, surrounding himself in music with a drive that only took him further.

Christian is SOWFLO’s bass player, backing vocalist, and he is an acrobat jumping three feet off the ground, dreadlocks flying as he moves frenetically with what he is playing. Then, the next second he lets the rhythm take him down slow and low. He slides down so low he is literally out of view.

Christian might be the local, but that doesn’t take away from any other band member! Along with Christian Yacono (Bass, Vocals, Synth), SOWFLO is made up of Jacob Dorris (Lead Vocals, Guitar, Lyrics), Daniel “Danger” Sahin (Lead Guitar), Nick Grim (Trombone), and James “Wes” Mitzelfeld (Drums, Percussion). They’re not one of those bands that just stand there. They perform with all they got. These guys interact with the audience, 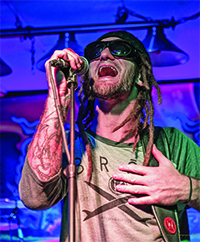 they move and draw you into the sound. This band even has some old rocker sound mixed in, but don’t ask how they’re able to incorporate that!

According to Christian, Jacob started the band in 2010. Jacob said, “it took us about three years where we went through some member changes before SOWFLO became the core of players who make the band and our sound what it is.”

Jacob and Christian engage each other on stage, which the audience loves. With hands pointing skyward Jake has qualities of a cross between Bob Marley and Bono, not a bad combination. Besides his creative talent, Jake makes the audience feel they are an integral part of the show. His easygoing manner adds to SOWFLO’s popularity. He is comfortable around the lyrics (all written by him) and his enthusiasm is contagious. He appears to be a friendly soul on stage.

Drummer James “Wes” Mitzelfeld performance includes a solo reminiscent of some of the greatest rock drummers ever. The solo rises to a crescendo as he rises to stand on his stool, and he slams it back with him as he jumps back down to sit. He plays with all his energy.

Lead guitarist, Daniel “Danger” Sahin was also a Marco Island resident and student from both Marco Island Charter Middle School and Lely High School. Danger works his way into everyone’s heart with his guitar. He takes a few soulful notes, pieces them together, and before you know it they’re full licks forming a song. His passion is evident through his body language and in his playing. His emotion is apparent too, as he engages the audience and the other musicians on stage. He comes ready to play.

Trombone player, Nick Grim rounds the band out with a smooth horn and a style which fits snuggly with whatever is happening on stage. There is a give and take onstage between Nick, Danger, Jake, Christian and Wes. It speaks to their talent and is one of the reasons this band so popular.

They PERFORM (with an exclamation point!), and definitely outperformed my expectations. The band toured last year with the release of their debut album, “Such is Life.” They were booked 200 nights out of 365. That is a hectic schedule for any band on the road. Last year the album hit #4 on the iTunes Reggae charts and #5 on the Billboard Reggae charts. “Such is Life,” released in June, is the music they will feature at the Jamaican reggae festival. “We’ve been performing and promoting the album everywhere and anywhere we can, using the time 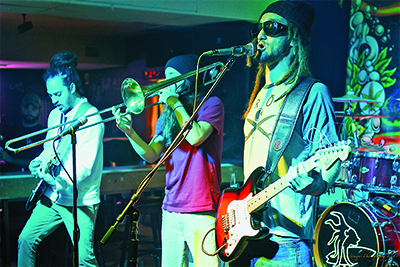 we find in between to write and record new songs for the next one,” commented Jacob, “We also have a new music video coming soon which will be the second video from “Such is Life.” Christian adds, “We have a spring and summer tour planned where we ‘road-dog’ it from coast to coast. We’ve played a good handful of states and we are excited to spread our music outside the United States, too.”

“The fact that we play music every day, and that we travel so far to meet and perform for all different kinds of people is amazing. It has been each band member’s dream to do what we get to do for as long as any of us can remember. We are living our dream, but the road does get hard. All the time someone comes up and tells us how lucky we are we get to live this kind of rock star lifestyle. Or they might say that, ‘It must be nice to be on permanent vacation!’ And they’re part right…but we also work ridiculously hard and put in more time than we can count to become good at our craft. We are road dogs, we don’t take vacations, we miss holidays and birthdays, and we live on close to nothing most days. But still other than the obvious challenges of creating good music and keeping our live performances fresh and exciting, I’d say that the ‘Vacation Lifestyle’ thing would be something we struggle with,” Jacob adds, “but we love it all.”

The crowd at their recent concert is a testament to their popularity. Father Kyle from St. Mark’s said he goes to see SOWFLO whenever he can. “We have video on YouTube from Camp Able where we sing one of SOWFLO’s songs.” A Marco Island Charter Middle School teacher was in the audience, as well as a member of Tommie Barfield’s faculty who was with a cousin from Illinois. Rick Yacono of Resort Management was on hand, which was no surprise since he’s Christian’s father. And anyone with children on Marco Island knows Ms. Yacono; Yes, Christian is her son and she can be found in the audience sometimes, too.

It takes thousands upon thousands of hours practicing your craft to create the perfect “Tipping Point” according to best-selling author Malcolm Gladwell. With all the time practicing and performing in the studio and on the road under their belts, SOWFLO is about to hit the tipping point on the scale–straight into recording history. Yah, mon!

For more information, scheduled performances or to buy a CD, contact Sowflo@gmail.com or check out www.sowflo.com.