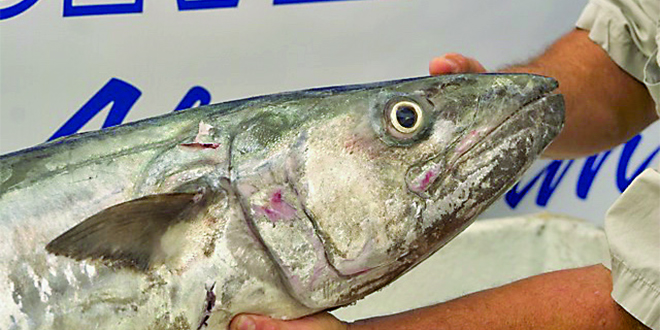 If you like fishing, excitement, sunshine, laughter, libations by the water, luscious food, suspense and good times, the place to be was dockside at the Pelican Bend Restaurant on Saturday, March 25th for a rollicking good time.

This was the initial foray into Isles of Capri as the site for the 2017 Gulf Coast Open Fishing Tournament sponsored by the Southern Kingfish Association (SKA). The flyer advertises; “Big Fish. Big Party” and they didn’t exaggerate.

Jeffri Durrance has owned the tournament since 2014. Jeff’s company, the National Boat Owners Association (NBOA) sells insurance to boaters and to most boating sports, but none that leave the ground (or water, like parasailing). Based in Sarasota, NBOA had a long productive relationship with the SKA and together they are combining talent, seasoned management/marketing expertise and vision to the competitive fishing arena.

“We are extremely excited about staging the tournament at Pelican Bend; the people and the island have been super, the weather is almost perfect and we have 25 boats registered for the event,” said Jeff, who is also the “Weigh Master” of the tournament – their first of the year. Jeff explained that the next tournament will be farther north to follow the fish migration.

The boats left in the pre-dawn mist, verified their registration by showing their numbers to the officials boat and off they went with the thrumming of engines that sends your heart thumping around in your chest cavity. (Many of you know that feeling!)

Some of the teams went over 100 miles to find the biggest, heavy-weight King Mackerel and hopefully take home the winning pot of money at the end of the day.

From 3 to 6 PM, there was a stream of boats returning to the Pelican Bend docks. Cleaning the boat had to wait as they single-handedly or in pairs, hauled their catch from their boat up the long dock to the weighing station to the delight and guesses from the crowds that gathered around. It was like Christmas. They carried the fish in white, sling-like, water resistant bags with handles on the top so you couldn’t see the fish until they did the big reveal – to oohs and aahs over the size of the fish.

Erin Henshaw, the tournament director, emceed the proceedings with humor. If you were closest to guessing the actual weight of the fish without going over, via yelling the loudest and the honor system, she handed you a coolie from the sponsors. Guesses were hot and heavy, even from the children in the group, who might not have cared about the coolie, but were definitely into the spirit of the event.

The kids and adults also enjoyed watching “Fred,” the local Goliath Grouper, who tried to snag the innards discarded from the fish cleaning station from the other fish and birds that were circling for a hand-out. Fred appears to be around 200 pounds, but moves like lightning.

The Kingfish were huge, in my opinion, and muscles strained to hang fish from the official weight scale. The winning fish was 49 pounds, but to my novice eye, some looked heavier. (I admitted novice status, okay?) It must have been the breadth of the fish or what he/she ate for dinner before being hauled into the boat because some of the weights were surprising. The kids in the crowd were stunned that many of the fish weighed more than they did.

David Worsham, a director of the Mercury Tournament Trail for the second year, explained, “Tournament participation declined in 2008 when the market fell. With the recent resurgence in the market, center console fishing boat sales are rising so tournament directors wanted to increase the categories and fun levels to include more participation.”

A team called “Top Down,” from Sarasota was the last team to dock. The tension mixed with exuberance from the crowd was palpable, but the team radiated confidence as they carried in their entry. The results? Their 49-pound Kingfish won with the highest weight. The largest Kingfish I could find in the SKA State Records was one caught in MS that weighed 74.1 pounds in 2009. Almost double the size of the whopper we saw!

I had a chance to talk to the winners, Jaime Manning, Todd Parrish, David Holifield and Captain, Jeffri Durrance, whose smiles were contagious as they enjoyed every minute of the celebration. They said it was a joy to be able to compete, the comradery, the perfect day, meeting great people on the Isles of Capri and of course, taking home the bacon. (Ok, not bacon, it was more like $12,000 for winning several categories.)

The most important detail of the tournament is that everyone on the dock at Pelican Bend had a great time, whether you fished or didn’t fish. Here’s hoping this is the location for many more exciting fishing tournaments in the future.