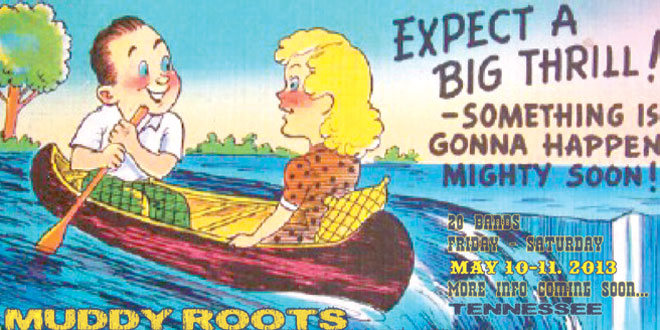 The flyer for Muddy Roots sister festival in May.

Gotta love this new and improved seasonal climate. It has me thinking that “winter” in southern Florida is upon us! Heck it did’t get above 73 degrees yesterday! Brrrr..

Chuckle, brrr… what can I say, I didn’t see snow until after high school, in Tallahassee, and it wasn’t enough to even stay on the ground. Anyhow, hope y’all had a wonderful Thanksgiving/Black Friday and you’re ready for whatever the last month of the Mayan calendar holds for us. I’m not so sure that time itself will end on December 21, but my fingers are crossed for good weather and lots’a great music!

Speaking of music, Alligator Radio is the official name of the new GatorNate & th’Gladezmen album, and it looks like we will be releasing on schedule, by the first of the year, and will be available for download/online purchase by mid January. Quite a few of the songs on the CD were inspired by the “Southern Americana Tour,” and I look forward to hearing what y’all think about it. On that note, over the last “so longs” or so, I’ve been running into quite a few old friends and acquaintances who tell me that they keep up with Music Notes and enjoy it. It’s always great to see y’all, and thanks for the kind words and support.

Yes, yes…the story! Now where were we….ohh yea…here it is…

BLAM! 8:00 AM, Sunday mornin’. The fog squatting on the mountain, only a few mice were stirrin’, hardly anybody awake. Of course, that was all about to change. I had everything but the kitchen sink plugged into the power strips, and when I flipped the switch, out came one of the loudest, nastiest, screechiest, most horrifying noises ever heard by human ears. In fact, it was so loud, so nasty, so screechy that my ears are still ringing as I write this… I think? Although it was extremely annoying, it actually worked to my benefit.

Like a giant alarm clock, it got the campers’ attention just long enough for them to realize that at least something was happening outside. Curiosity must have gotten the best of some people because by the time I’d played the first few song, there were nearly a hundred, barely awake, half dressed music lovers standing in front of me. They actually looked kinda happy, so I proceeded to play a few more songs and a few more, until well over an hour had passed and I was having a real blast! The crowd just got bigger and more alive as I continued, song after song. Eventually the sound men did show up, and the show, – the real show – began. What a time! I 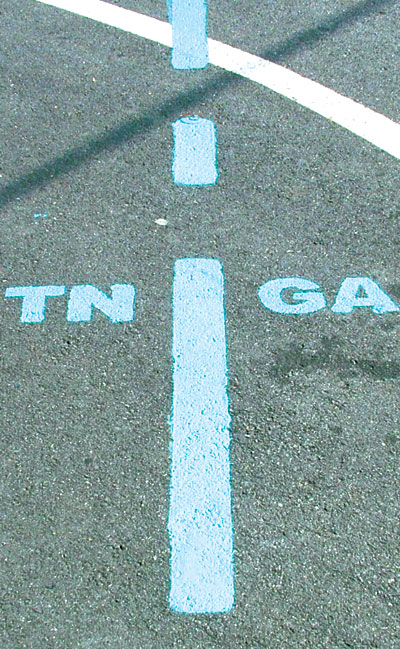 The state line in Copperhill behind the legendary Donald Rays Brothers Place.

then became known as the guy who plays “breakfastbilly”, sort of a ham n’ eggs version of rockabilly. I think?

As the day went on it became obvious that more people had heard the show than seen it, as the question kept coming up, “what was that band that played early this morning? I heard it from my tent. It sounded like some kind of swamp music, it wasn’t on the bill that I got.” The answer was always something like, “Its that big red bearded dude from Florida…Gator Nate!” I was on cloud nine. So incredibly excited about the response to my music, I decided to celebrate a little bit. So there we were, in the early hours of the afternoon, turning them mountains from blue to silver if y’knowuddameen. Guzzlin’ groceries, sluggin’ suds, having a barley sandwich, taking my vitamin B, hangin’ out with my brewskis, you know, having a good ol’ time. When out of the corner of my eye, I see one of the event organizers heading in our direction. Dang… (I don’t think I broke anything)… Well, to make a longer story shorter, he said he’d been looking for me to thank me for playing that morning, and asked me if I had any interest in filling in for a band that couldn’t make it to the event. It was 1:30 now, the show was at three and I needed to be ready behind the stage a half hour before the show. That leaves 30 minutes to un-celebrate… Hmmm…. ABSOLUTELY!!!

I didn’t really have to think about it. The “real” show went off great, got to play a set to a large excited crowd, I made a lot of new friends and fans, got invited back for next year with my band, and somehow sold out of almost all the CDs before the Sunday sun went down. Shortly after dusk, the rains came and I hightailed it outta there for the nearest “W hotel” to get a good night sleep.

The drive back home was a long one, but I guarantee there was a smile on my face the whole time! What a trip, what a time. Thanks to all the people I met along the way, mark “Muddy Roots 2013” in the Tennessee mountains on your calendar if you haven’t already. Better believe I’ll be there!