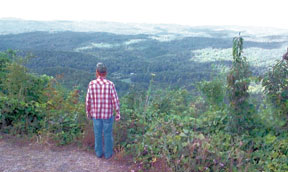 Big country for a boy from south Florida. SUBMITTED PHOTOS

In this issue, Music Notes returns to the story of Gator Nate’s big 2012 summer adventure… “The Southern Americana Tour” was a one man musical quest spanning thousands of miles and seven states, including Florida, Georgia, North and South Carolina, Virginia, West Virginia and Tennessee.

If you are just tuning in, and need a bit of background on the story, then here goes: by now, we’ve been on the road for nearly three weeks, playing music, eating great southern food, camping at some of the worlds most gorgeous spots, cruising the highways and byways in “Silver” (the trusty Ford Econoline), catching up with friends n’ family and meeting new folks. This leg of the journey lands us on a massive hillside compound on the outskirts of America’s music capital.

Nashville, Tennessee attracts singers, songwriters and musicians from literally around the world. The Grand Ole Opry, Ernest Tubb’s Record Shop, Layla’s Bar, Belle Mead Plantation, Gruhn Guitar Shop and RCA Studios are just a few of the stops on the walk through “the city that country music built.” Although an aspiring entertainer could easily get lost in all these “once-in-a-lifetime” activities, our journey takes us just a little off center of this “musical epicenter,” to a place called the “June Bug Ranch.” This “ranch” as it’s affectionately referred to, is quite a ways off the beaten path. In fact the place is down right hard to find if you’ve never been. Luckily, a few of my Florida friends had already set up camp at the ranch. They agreed to come back into town to meet up at the “Wal-Mart Hotel” and guide “Silver” and I into what would turn out to be “The greatest collection of roots music anywhere in America!” YEEEEEHAWWW!!!!

We were stoked! The weather was in the low 70’s and the mountain air was dry and crisp. Everything was working out perfectly. The annual “Muddy Roots Music Festival” was only a couple miles of dirt road away, and after we’d gone up and down a few mountains, the “June Bug Ranch” sign was in sight. Music was in the air, literally. Although the event didn’t technically start till the next day, there were already about 200 or so folks putting up tents, collecting firewood, setting up stages (as there were three going on at all times), and of course, playing music. “Roots” 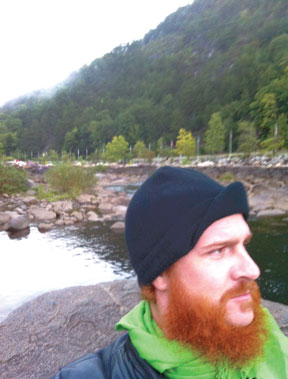 Gator Nate plans his next move.Plenty of shade in Tennessee.

My first plan of action after I made it in, was to find some good high ground to make camp for the weekend. Of course, that was’t too difficult on a beautiful, grassy, fifteen acre hill with oak, pine and maple trees galore. Finally, after cruising around and checking the place out, I decided on a little shady nook at the very top of the hill, right along the tree line, with a perfect view of all three stages. The first night was filled with “warm-up” campfire jam sessions with some friends from Miami, a band named “Los Bastardos Magnificos” and a couple other Florida musician buddies, Lone Wolf and Scotty Crow. We proceeded to “warm up” till the wee hours of the night, and when it was “that” time, we didn’t have far to go.

Outside in the mountains, under a starlit night as the temperature drops into the fifties, to me, is about as good as sleeping gets. The next morning was when the people started piling in. By about five o’clock, the place was nearly full. From the first (on-stage) band at noon, till the last at 2:00 AM there was nothing but great music. The folks that throw this event not only take pride in getting the best bands, they also have awesome taste in music. Hats off to anyone who can pull something like that off.

This year, the promoters decided that since there were so many good bands that wanted to play but couldn’t, due to time and money constraints, they would have a stage setup with an “open-mic” format. Basically, you signed up online, and they responded with a time slot. I was in! Well kinda… Ideally, I would put on such a great performance that they would invite “Gator Nate &The Gladezmen” to come back next year and play on the “real” stage.

The reaction from the crowd is always a big variable to any show. Luckily, the crowd this year at the June Bug Ranch was awesome! They hooted, they hollered, some even sung the words along with me. I not only felt at home, but with all the positive vibes in the audience, I really got into it and rocked out! They appreciated my music, and I appreciated their hospitality (and moonshine). Dang, that was fun, and we still had two more days!

So Friday came and went, and by the 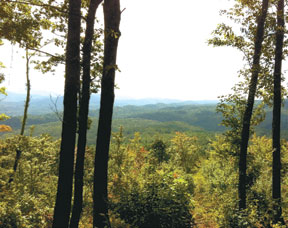 Plenty of shade in Tennessee.

time Saturday rolled around, I felt pretty good about the way it was going. Quite a bit of the day was spent at the “Cracker Swamp Records” booth, hanging out, telling stories and even selling some CDs. Owned and operated by fellow Florida cracker, “Cracker Swamp Records,” out of the Orlando area, independently released albums for the likes of Husky Burnette, The Johnny Monster Band and other blues and roots acts. The booth was like a home away from home for all the Florida bands and fans. “Bring what you play and sit on down and play along.”

Saturday is always the biggest night of the event, and this year was no exception. The Reverend Horton Heat, Dale Watson, Little Jimmy Dickens and Bob Wayne were just a few of the headlining acts. My picks for the day were The Legendary Shack Shakers, The Pine Hill Haints, Hillbilly Casino, The Dirt Daubers, Jayke Orvis and lots more!!! After a long, 15 hour day of ultra-inspiring music, all I could think about was playing more music. Is that crazy? Oh well if it is. It’s true. So, I plotted and planned all through the night, squirming in my sleeping bag; I could get no rest. Then it hit me. There is no official music till noon on Sunday and the way it’s set up is that everybody camps around the two main stages. Being that I was already on tour and I had everything I owned, including my P.A. system in the back of the van, I could put out as many watts as my speakers would handle. What a great idea!

So…before the sun rose on Sunday, I snuck down by the stage and set up all my gear, plugging into their electricity, and when the sun finally rose at about 8:00 AM, I plugged it in, turned it up as loud as it would go, and BLAM!

To be continued next tweek…

Remember, we still gotta make it back home, and that’s a long way!