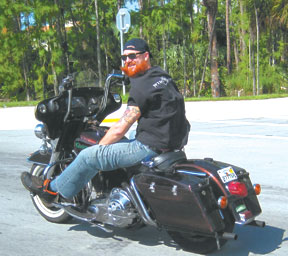 Riding through the mountains with Pops.

Although the beautiful North Carolina wilderness had been so good to me, there were “Gatorheads” down in Georgia and Tennessee that had waited patiently for my arrival, and they were not gonna be let down. Not this trip, and definitely not by me. So, I got up, bright n’ early, at the crack a’ dawn, and as the heavy mountain dew was still rising off the river I said goodbye to Rusty and all my friends in Nolichucki and hit the road in ol’ “Silver,” my trusty Ford Econoline.

The weather that day was exceptional for traveling; overcast to keep it cool and not a whole lot of traffic on the interstate. Hands down, my favorite stop on the trip through the Appalachian and Smoky Mountains, is a little town in north Georgia that so many southwest Florida folks have made their second home, Blue Ridge. Nestled at the very upper west corner of Florida’s sister state, it’s attracted many “flatlanders” that love the feel of the cooler, dryer mountain air when summer hits. Going to the grocery store in Blue Ridge can sometimes seems like Marco twenty years ago. The same faces… literally.

My family has been in the area since the mid 80’s and I have many great memories of visiting in the summers as a youngster. Camping down by the pond on my uncle’s property, horseback riding through the mountains, fishing the lake and whitewater rafting were just a few of the highlights for a young and impressionable “Gator.”

The Smokeys’ beauty and awesome motorcycle roads attracted my parents (Happy 39th Anniversary!) to become part time+ residents of Blue Ridge. Of course, the fact that we already had family and friends “on the mountain” didn’t hurt either. So, not only do I have a nice hot shower waiting for me, Momma’s cookin’ is “what’s for dinner!” Yee Ha! Then gonna’ probably have to go hit some trails with my Pop and a few cousins on the four-wheelers and dirt bikes. It really is a tough life… yea right…

Now that the quaint, sleepy town of Blue Ridge finally decided, a few years back, to “let there be bars,” there actually was a bit of a night life. Opposite the Blue Ridge Brewery, owned and operated by Marco Island native, Pat Walker, is the Whistle Stop Bar. That is where I’ll be setting up shop to “rock out” this evening. Between my family, friends, a few locals and some random 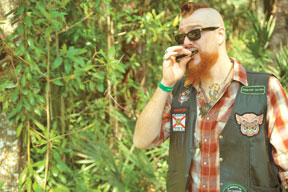 Gator Nate warming up for the big gig. SUBMITTED PHOTOS

unassuming patrons, we had a nice crowd. They enjoyed listening to em’ almost as much as I enjoyed singing them. It, as always, is nice to see folks that I haven’t seen in a while. Over about a week’s span, I played four shows within drive from Blue Ridge, making sure to milk the “favorite son” thing for all it’s worth. That’s one of the perks of being the “Only Child Family Band!” Mmmm…

Murphy, North Carolina is about the distance from Marco to Naples, and Doyle’s Tiki Bar always welcomes me with awesome food, a very friendly family-run staff and a stage to play on. This time was no exception. About the same size as Naples, it’s a nice little city where I’ve made some good friends. Also mentionable is their “Tuesday Flea Market,” where my Dad gets all his socks and “reader specs.” According to him, you get twice as many socks for the same price and who doesn’t need more socks? It has become a family tradition on Tuesday mornings. You can almost set your watch to it.

Ellijay, Georgia is also just a hop, skip and a jump south from Blue Ridge. The local watering hole, The Poorhouse, is a neat place with a huge stage and Josh & Nate always treat me like a king! I may be a swamp music playin’ whiskey drinkin’ motorcycle ridin’ king, but royalty is royalty. Right?

Without a doubt, I gained a few pounds from Momma’s home cookin’ this week, but I might need ‘em. Nashville, Tennessee was plugged into the GPS. The June Bug Ranch to be exact. My main “gig” wasn’t really a gig at all. Although I was planning on “sittin’ in” with a few buddies bands, they didn’t have “the Gator” scheduled to play “officially.”

The Muddy Roots Music Festival is an annual gathering of musicians and friends including about 70, yes 70, live band performances and five or so thousand fans. Guaranteed to be the best roots and Americana music from around the world. I had finally made it. This was gonna be awesome!