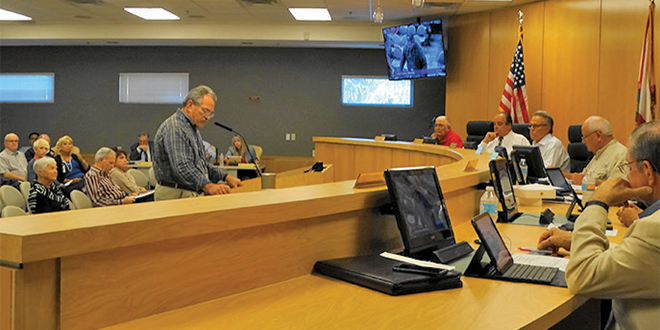 At the October 17 meeting of the Marco Island City Council, Gary McAlpin, the Collier County Coastal Zone Manager, stepped forward to update the council on Collier County’s plans to re-nourish an approximately 4,000 foot section of the beach.

The project is the result of damage done by Tropical Storm Debby, which impacted Southwest Florida and moved up into the Panhandle in 2012. The project is being funded through a FEMA grant to restore that section of the beach, which runs from the Cape Marco area northerly for about 4,000 feet.

“The sand we will be utilizing will be a larger grain and better quality sand, one which we have had good luck with in the past,” said McAlpin. “One of the qualities of this material is that it should stay on the beach longer,” concluded McAlpin.

Originally FEMA had estimated the project to cost $161,000. However, when the bids were tallied the lowest responsible bidder came in at $575,000. The Board of County Commissioners then approved the plan, along with a number of other projects, at their meeting last week.

The plan involves 900 truckloads of material, which will come onto the island and access the beach area via the Cape Marco access point. According to McAlpin, the South Beach Access Point will remain open during the extent of the project.

“I’m concerned about the impact to our residents,” said Councilman Ken Honecker. “We will be working on the beach from approximately 9 AM to sunset,” said McAlpin.

Had the county utilized a dredge and barge method the cost could double or triple in estimates, and possible exceed the window of available time to complete the project, placing grant monies in jeopardy.