Something New is Cooking in the Island Country Club’s Kitchen 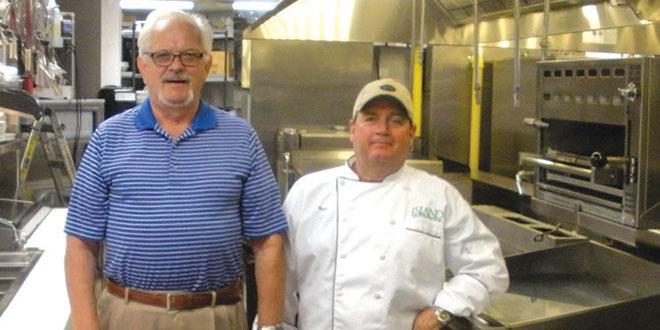 While not obvious to diners in the Island Country Club’s dining room, a revolution, of sorts, has taken place behind the swinging doors that lead to the facility’s kitchen.

It’s there that the club’s investment in a new, state-of-the-art kitchen is making life infinitely easier for executive chef Kurt Beattie and his staff, saving time and effort in the preparation of meals, while also helping to reduce the club’s energy costs.

“Probably 85 percent of it is brand new,” said Beattie. “We couldn’t do anything with the footprint of the kitchen, so what we did was go with state-of-the-art equipment that is much more efficient, things that can do the job faster for us in the kitchen.”

The kitchen’s design has also been updated to heighten efficiency. “Now, we have the same square footage, but it’s just laid out so much better,” said Beattie. “The efficiency in the kitchen is night and day, compared to what it was.”

Rudiger Loose, the club’s general manager, said the kitchen was completely gutted for the project so that walls, floor, ceiling, electrical wiring, plumbing and even floor drains could be replaced.

Budgeted at $1.3 million and accomplished for $1.1 million, work on the project began in May and was completed in time for the scheduled October 16 reopening of the second-floor dining room, which was closed during construction. The club’s Double Eagle Grille, located on the ground floor, remained open over the summer.

The project was one whose time had come, said Neil Platt, the club’s director of house maintenance.

“The club was built in 1995 and nothing had really been done in the kitchen, the floors hadn’t been updated, nothing had been done with the ceiling,” Platt added. “The walk-in coolers had been replaced in 2005, but they were in bad shape.”

Loose said the project required contractor, Bonita Springs-based Gates Construction, to utilize large cranes to hoist two-ton air conditioning units onto the roof, funnel new equipment into the facility through dining room windows and rip holes in interior walls to get some of the equipment into the kitchen, before returning everything to pristine condition.

All three men praised the contractor’s work. “They were excellent, excellent,” said Loose. “Best company I ever worked with.”

It’s not uncommon for the kitchen staff to serve large parties in the dining room, which seats more than 180 people. “Out of the kitchen, we’re serving up to 800–900 people in three seatings, sometimes,” said Loose. “An average night for a dinner dance is 200 to 250 people.”

Beattie said he and his staff has always been up to the challenge, but the task is much easier now.

“We did a party here for 200 people and the kitchen was as clean and organized at the end of the party as when we started,” said Beattie. “I said, ‘It’s really coming together.’ The crew is really ecstatic because they’re working in one of the finest kitchens around. “I walk into that kitchen every morning and I just go, ‘Wow.’”

If you get invited: The Island Country Club is located at 500 Nassau Rd. For more information, visit island-countryclub.org or call 239-394-6661.