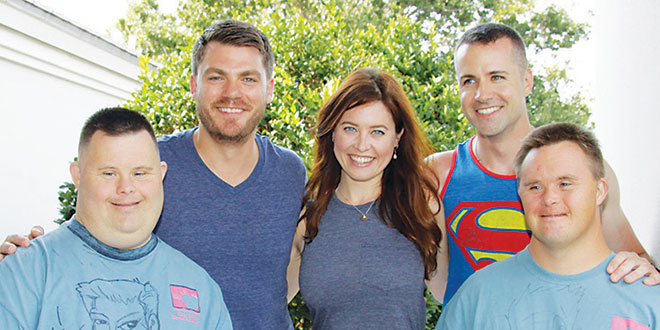 Troy – Jeff Branson – Melissa Archer – John Driscoll – Frankie with drawings on their shirts by Days Austin Peck at 15th Soapfest 2014 painting party onMay 24, 2104 gathered together to do paintings with guests and the proceeds went to charity- The weekend of events is held on Marco Island, Florida. Photos by Sue Coflin/Max Photos

Providing a setting where stars and fans can intermingle has worked well for the annual SoapFest Charity Weekend.

Now in its 16th year, SoapFest brings actors from daytime soap operas to Marco Island for a weekend of fun and fundraising for local children’s charities. The festival enables fans to rub elbows with the daytime stars at a series of public event fundraisers, held Friday through Monday.

Set for May 22 through May 25, SoapFest also includes the private Art 4 Autism painting session, in which the stars team up with autistic children and adults with autism to create paintings that are later auctioned off at a SoapFest event.

SoapFest founder Pat Berry attributes the event’s popularity with actors and fans to it being “a more intimate more relaxed type of event.

“The usual soap event has the actors up on a stage, then sit at a table, where people line up and you can get autographs and pictures with them,” Berry added. “Our event is more relaxed because you get to hang out with the actors. I don’t think there’s another event that does what we do.”

SoapFest Charity Weekend will commence at 7 p.m., May 23 at Bistro Soleil with “A Night of Stars,” with a meal prepared by award-winning chef and co-owner, Denis Mergue. The VIP event will offer opportunities to mingle with the actors, who will also be available for autograph signings and photos. The evening will also include a Q&A session, a live auction and “SoapFest Game Night,” where guests vie for prizes based upon answering trivia questions about their favorite soap stars and shows.

Tickets for “A Night of Stars” are $125 per person, including dinner. A limited number of VIP tickets, which guarantee seating with the buyer’s favorite celebrity guest, are available for $200. 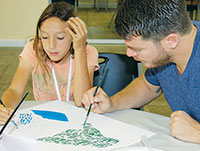 Jeff Branson – Young and Restless and AMC paints with McKenna at 15th Soapfest 2014 painting party on May 24, 2104 gatheredtogether to do paintings with guests andthe proceeds went to charity.

aboard the Marco Island Princess, entitled “Cruisin’ Boozin’ & Schmoozin with the Stars,” kicks off day two of the festival. Raffles will be held for signed scripts, iconic clothing, jewelry, signed paintings and other daytime drama memorabilia. Tickets for this event are $130 per person and include a luncheon buffet.

The annual “Celebrity Karaoke Bar Bash” will take place that evening, starting at 9 p.m. and lasting until closing time at La Tavola Restaurant and Bar, located off Winterberry Drive. The festivities feature the actors singing their favorite tunes while pouring drinks to raise money. Tickets are $75 per person.

SoapFest will conclude on May 25 with the second annual “Sponsor VIP Brunch with The Boys of Daytime,” which is new this year. Berry was keeping details about the event under wraps at press time.

The brunch was new last year. “It’s a bit on the order of the “Hollywood Game Night,” said Berry. “Instead of just talking with them, you can learn different things.” She said that one of the questions, “never have I ever,” is sure to generate some interesting responses.

Beneficiaries this year will include Camp Able, a summer camp for special needs children at St Mark’s Episcopal Church and the Island Theater Company Kids Program, among others.

The soap stars scheduled to appear include:

Christian LeBlanc, Sean Caragan, Jeff Branson and John Driscoll from CBS’s “The Young and The Restless”

This will be LeBlanc’s second time attending SoapFest and is looking forward to returning to Marco.

“I’m going to help MC and I’m excited,” said LeBlanc, who portrays “The Young and the Restless,’ ” Michael Baldwin. “This is an important charity. One of my nephews is on the autism spectrum. It was amazing to find out 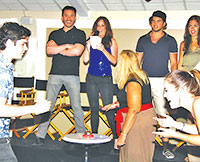 about his diagnosis. If you don’t know anything about autism, you’re afraid you won’t be able to communicate. But he’s an amazing kid. I was so impressed with it the first time and it’s in Florida for Pete’s sake and you’re with your compatriots.”

He is especially looking forward to interacting with the autistic youths and adults. “Sometimes you work with a charity, you don’t see the people that you’re helping,” said LeBlanc. “It’s a pretty amazing situation, sitting there with the mothers and getting your hands in the colors.”

Carnes, who plays Lucas Jones on “General Hospital,” will be making his first appearance at SoapFest.

“It’s the first year I‘ve been invited, and when I found out what SoapFest is all about and found about the good I would be doing, I said yes right away,” he said. “I love kids and I think kids need more positive role models and any time I get a chance to do something with kids, it’s something I want to take part in.”

Carnes said he found out about SoapFest from LeBlanc, who raved about the experience when they were chatting in April at the Daytime Emmy Awards.

LeBlanc relishes what he described as a rare opportunity to hang out with fellow actors from the different soaps and a chance to get up close and personal with loyal soap opera fans.

“The combination of the two, I have a great time,” he said. “Getting a chance to meet the audience is rare. I prefer that to having a poll done or ratings. I want to hear what they have to say. I’ve had some amazing conversations with the people who actually pay my salary. It’s actually very gratifying.”

To purchase event tickets, get updates on schedules and the list of actor attendees, visit SoapFest.com. Tickets can also be purchased by phone by calling 394-0080.