Soapfest: A Weekend of Stars 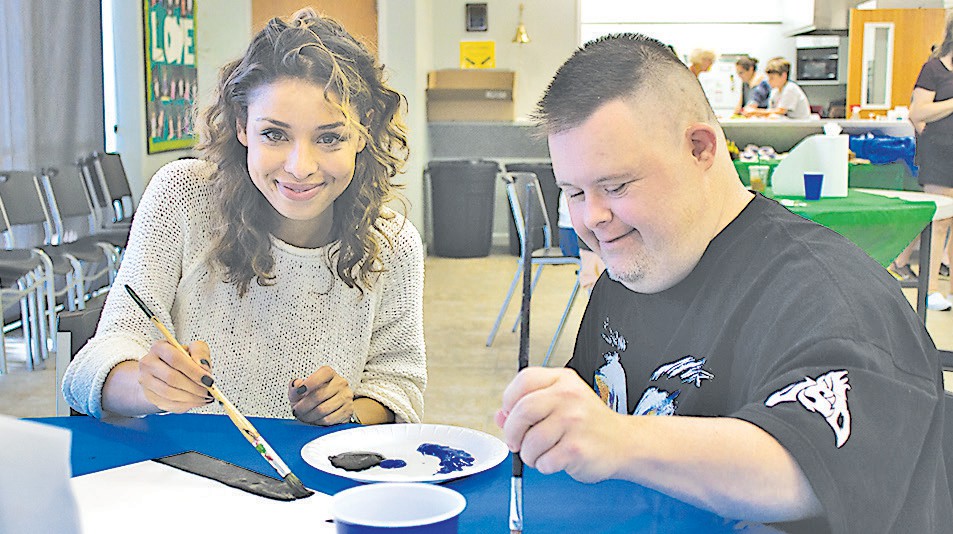 This past Memorial Day weekend, it was a holiday filled with stars as the Soapfest Charity event officially kicked off May 27-29. This was the charity’s 18th year that brought daytime actors from the greater Los Angeles area to Marco Island to raise money for local organizations.

On Saturday morning, the first event of the weekend was a behind-the-scenes exclusive as children with special needs painted with the soap actors at St. Mark’s Church. This was an activity where the children got to connect with the actors and express their creativity that resulted in a unique work of art. The parents looked on from another room to allow the bonding session. This was also an opportunity for the parents to mingle as they watched their kids feel like a star in their own skin.

The smiles the kids wore after they finished their paintings with the actors gave meaning to the entire weekend ahead. The actors and kids all posed outside on the playground to celebrate their hard work. 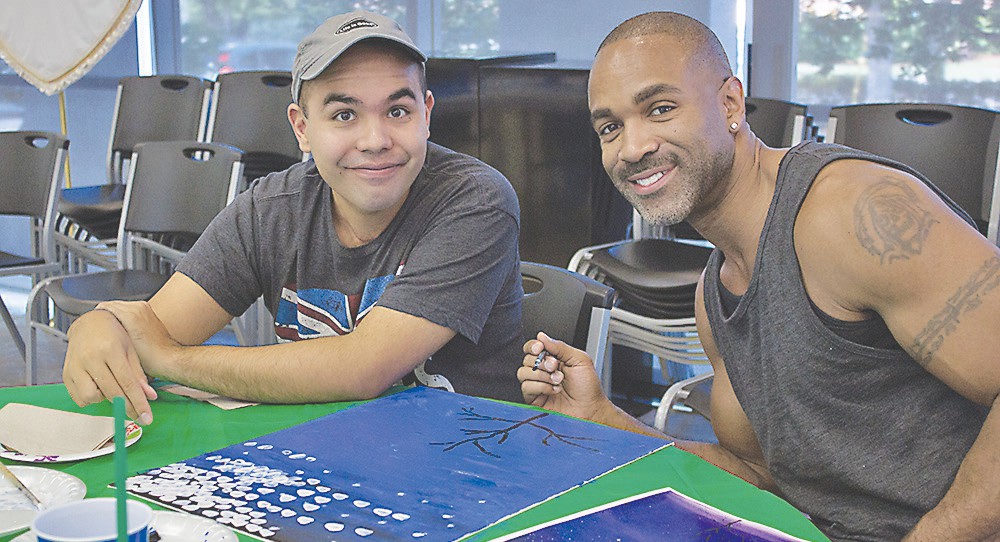 Michael and Donnell Turner smile for the camera as they paint a starry night on canvas.

While this may seem like a small activity, it speaks volumes to the impact it leaves on the children.

The paintings are then used for the three auctions throughout the weekend. The first being the evening event that Saturday that followed the afternoon painting activity. This is the “Night of Stars” event which brings the full cast panel to sit at different tables with sponsors and VIP guests. The room was filled with laughter and chatter as many guests have been returning to this event for several years. The down-to-earth stars made it feel as if you were having dinner with an old friend. Especially when it was time for the game portion of the evening.

The popular “Soapfest Game Night” commenced and guests had the opportunity to play on one of the teams with the actors. They went neck-to-neck in competition to answer questions provided by the M.C., Jared. This VIP event offered several opportunities for up close and personal time with the actors. 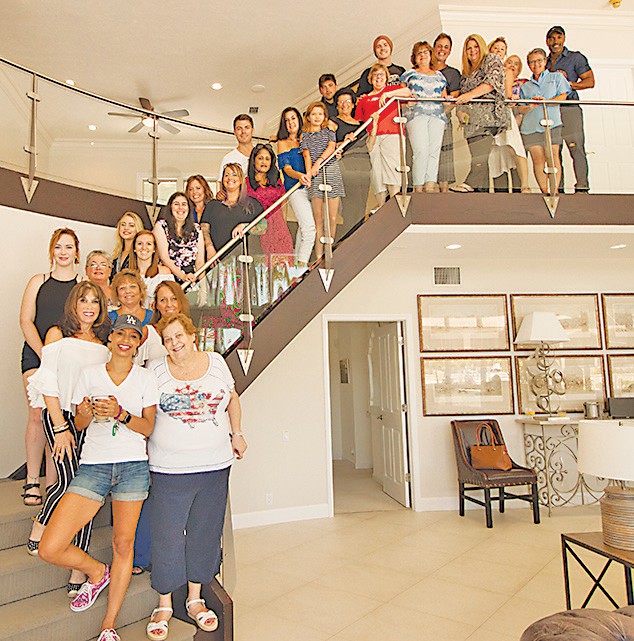 Farewell brunch between sponsors and soap actors held at the lavish home.

autographs, photos, played “Never Have I Ever,” and hosted the live auctions. The auction featured the paintings from the earlier activity of the day. Some of the painters were in the audience and presented their work with the actors as they joined forces to raise money for Camp Able.

The fun continued Sunday as a late morning tour aboard the Marco Island Princess took all guests along the coastal areas of our area. The three-hour “Cruisin’, Boozin’ & Schmoozin’ with the Stars” boat ride was a perfect opportunity to mix and mingle before the second auction. On the tour dolphins frolicked in the water. Guests had the chance to participate in raffles to win signed scripts, iconic clothing and jewelry, among other coveted items, before the boat docked.

The night event following was the highly-anticipated “Celebrity Karaoke Bar Bash,” hosted at Mango’s Dockside Bistro in the Esplanade. Mango’s served plenty of food and provided ample space for all of the activities to run at once. This “after party” was 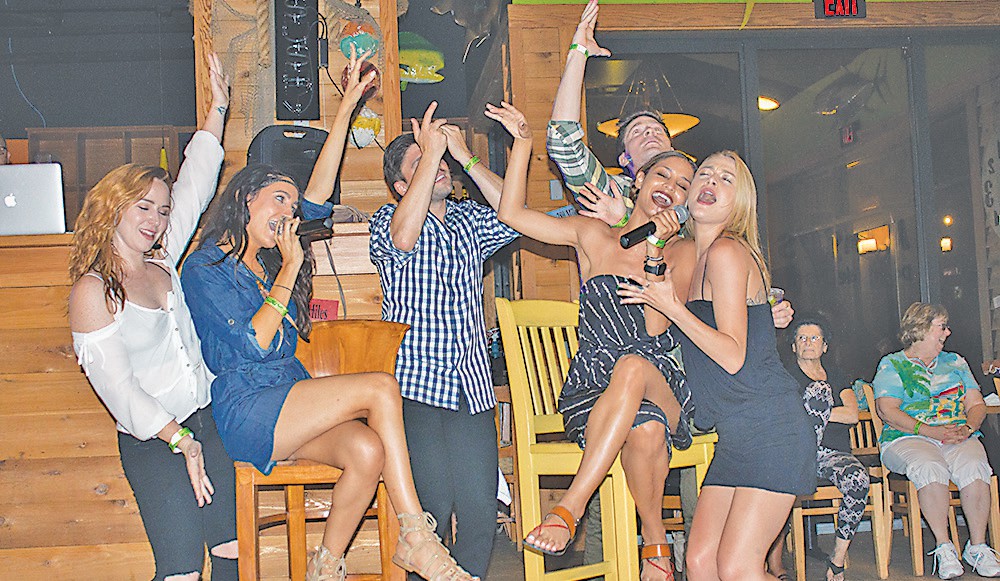 the last public event that had all the stars step behind the bar and create delicious concoctions upon request from the guests. As this is one of the more casual events, the actors and guests got a little wild with silly performances to popular songs while the other actors bartended.

After a fun-filled weekend, the sponsors and donors had a farewell VIP brunch held on Memorial Day in a private home that felt as if it was designed for hosting parties. The stunning seven-bedroom, nine-bathroom estate connects two lots into one with direct access to Robert’s Bay. The home had two living rooms, a billiards table, and its own bar area which was perfect to serve endless refreshments at brunch.

The dining room off the kitchen accommodated the 40 guests with two large tables, two smaller tables and a round table for the volunteers. Actors and guests took a tour of the home before and after eating. They even stepped outside to check out the tennis/basketball court, large pool 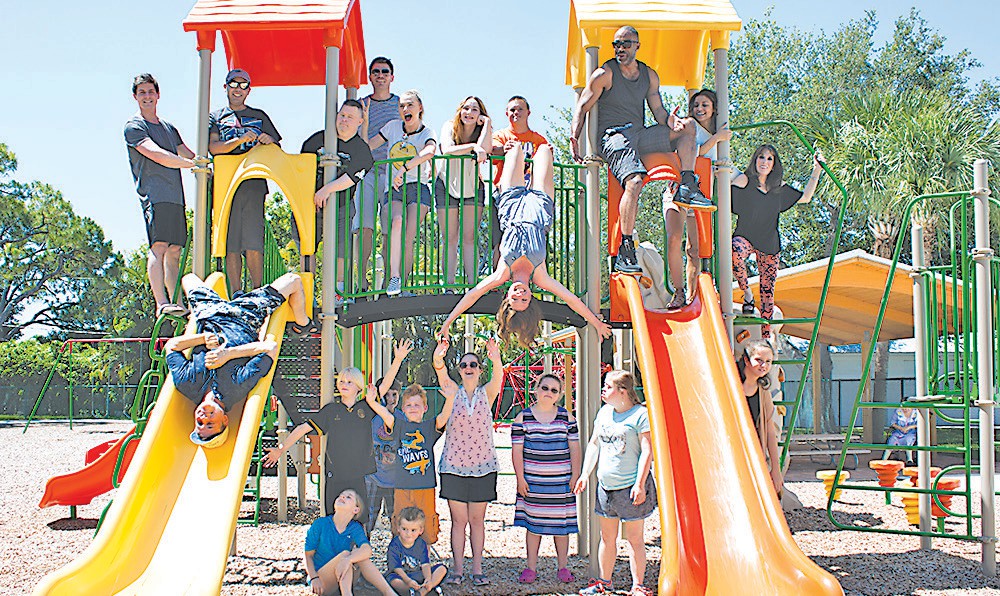 After creating their works of art, the group all posed outside on the playground.

patio, and stopped at the dock. Here the guests tried spotting some marine wildlife in hopes to see a manatee in the canal.

The generosity of Soapfest helps fund local charities and organizations in the community. One organization that has been supported for several years is Camp Able. As described on its website, “Camp Able is a vacation, birthday party, and family reunion all rolled up together. Camp Able is a gift of mutual respect and compassion wrapped up in silliness and love. Camp Able aspires to be a community that celebrates diverse abilities and gifts. Camp Able is not about what we can’t do, whether camper or staffer, the focal point is what we ‘can’ do.”

Support the Arts for the Kids and children with special needs. To find out more about Soapfest and how you can donate visit www.theateronmarco.com/soapfest. For more information on Camp Able, visit www.