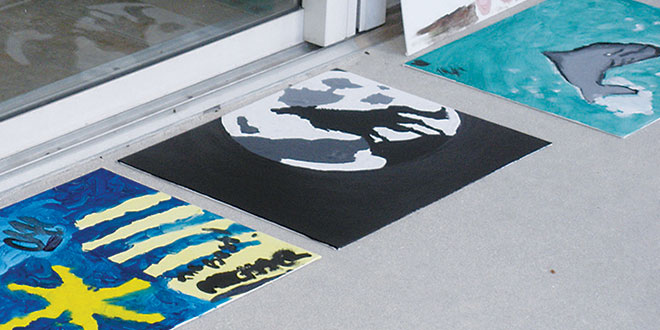 The day’s paintings dry in the early afternoon sun.

Kathy and Kelly Manha were a happy mother – daughter duo as things were winding down in the activities room at St. Mark’s Episcopal Church.

It was their first time attending the Art 4 Autism portion of the annual SoapFest Charity Weekend, and the Manhas were indeed glad they decided to spend their Saturday morning in that way.

“It’s been wonderful,” said Kathy Manha, as her daughter sat at a table behind her, putting the finishing touches on a painting. “We feel blessed that so many people would volunteer so much of their time. The actors will go home and it will be over, but she’ll be talking about this forever.”

SoapFest enables fans to rub elbows with the stars of daytime soap operas at a series of public event fundraisers, held May 22 through May 25 this year. The private Art 4 Autism painting session, which launched day two of the festival, matches stars with autistic children and adults, and they team up on paintings that are later auctioned off at a SoapFest event.

The festivities kicked off with “A Night of Stars,” held at Bistro Soleil. The VIP event offered opportunities to mingle with the actors, who were also available for autograph signings

John Driscoll of CBS’s “The Young and the Restless” and Frankie pause while completing their artwork. PHOTOS BY DON MANLEY

and photos. The evening included a Q&A session, a live auction and “SoapFest Game Night,” where guests vie for prizes based upon answering trivia questions about their favorite soap stars and shows.

A noontime, three-hour long cruise aboard the Marco Island Princess, entitled “Cruisin’ Boozin’ & Schmoozin with the Stars,” was the second event of the festival’s second day. Raffles were held for signed scripts, iconic clothing, jewelry, signed Art 4 Autism paintings and other daytime drama memorabilia. The day concluded with the “Celebrity Karaoke Bar Bash,” which took place that evening at La Tavola Restaurant and Bar.

SoapFest concluded on May 25 with the second annual “Sponsor VIP Brunch with the Boys of Daytime.” Beneficiaries this year included Camp Able, St. Mark’s Episcopal’s summer camp for special needs children, and the Island Theater Company Kids Program, among others.

The soap stars who appeared this year included:

Like the Manhas, Carnes was attending SoapFest for the first time, and Art 4 Autism, was one of the main draws for him. 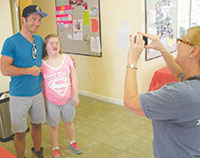 Ryan Carnes poses with Sarah Reveland, as her mother Julie snaps away.

fun,” said Carnes. “It was such a sweet experience to get to hang out with the kids and do things with them that they may not ordinarily get to do.”

Carnes said the mother of the first girl he painted with told him that her daughter did not like to paint. “But today, for whatever reason, she dove right in,” he said. “She did the whole painting, with my help.”

Christopher Sean, another first-time attendee, was all smiles at the painting session’s end.

“This is the main reason why I’m here – for the kids, for the creative arts therapy, for the experience working with these children and all of these wonderful, wonderful, beautiful people,” he said.

Melissa Archer was making her third appearance at SoapFest. She listed several reasons for continuing to return.

“This part, painting with the kids, I love,” she said. “And it’s such a fun weekend. I love Pat [Berry, SoapFest’s founder and organizer]. I always want to come and see her. The whole weekend is so full of fun things, and of course, the cause is excellent.”

For Troy Porter, the opportunity to paint with the stars at Art 4 Autism has become an annual event. He enjoys the painting, and “meeting the soap stars. They have beautiful women.”