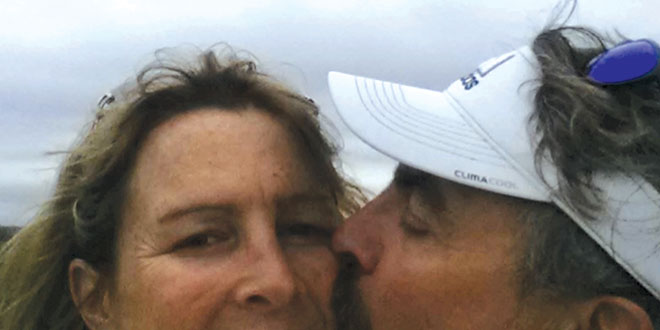 Camping in the rain? So what! SUBMITTED PHOTOS

Camping in the rain. Okay, in a trailer, but still.

We managed to observe a fairly uncomfortable nature walk with spirits high enough for a kiss on the canopy boardwalk. I did think, “Darn,” (might have used a different word), and then made the decision to say, “So what?” so as not to completely ruin the day. I have an image in my mind of a close friend’s t-shirt that she wore until thread bare. It pictured good old Charlie Brown on the front with his hands thrust up to the heavens and a caption over his head that read “SO WHAT?!” I also recall one day, watching her search for it and not being able to find it (ever again). She looked up eventually, and said, “SO WHAT?”

Those two words — “So what?” — can be extremely liberating. The question mark at the end is not meant for an answer but perhaps a quick deliberation with oneself, allowing the issue to simply disappear without judgement or otherwise render it unimportant at the moment. We can look at the two words separately, as each of them standing alone pack a powerful statement as well.

“SO” leaves an infinite number of possibilities, permitting a sense of open or close or just let go of. It can be left in the air in conversation, thereby allowing the listener to formulate a response or create time for the speaker to feel or think of more to add to the topic of that conversation. This word also can come with various audible inflections that lead us to another entire set of feelings and circumstances. Picture the young girl in the school yard with her classmates around making fun of the fact that she is wearing the knee socks her mother forced her to wear. How would her “so” be heard? Or, picture the employee facing his co-worker who got the raise that everyone was hoping to get?

Then there is “WHAT.” This is a word that can be left dangling, perhaps for the purpose of creating a response. It can be a frustrating word. It can be an exploratory word. It can seem like a rude word as well. When my nieces were young, we were at lunch with a friend and her daughter that was close in age —between 4 and 6 years old. When the other little girl in conversation said loudly “WHAT?!” one of my nieces responded with, “You’re not supposed to say, ‘WHAT!’ You’re supposed to say, ‘EXCUSE ME’,” which in her little language came out more like “AFOOZE ME.”

When we are practicing our balancing postures, or any pose for that matter in yoga practice, I know that the ego can begin to speak loudly causing the student to feel that they are not any good at it and leave them feeling inadequate. It can spiral down from there. After I feel and see this in the collective whole of the class, I often ask them to let it go — sweeping my arms down the sides of the torso then sweeping them up into the air — and to say out loud or to themselves “So what?!!” At the close of the pose and the end of the session, I always add see you next time; we can get together and do it again!

I think I just decided what we can do while being stuck in the trailer in the rain. We can practice saying “So what?” and do some yoga. It’s too small in here to do it together, but “SO WHAT?”

Dianne Saywell works full time as a dental hygienist at a local dental office educating and helping patients maintain their oral health.  She also spends her time introducing people to and sharing the healing power of YOGA and the health it brings to the body, mind and spirit.  She offers group classes and private sessions at all levels, contact her at yogadi77@yahoo.com.